Some plants are not cool, skunk cabbage heats up

Posted on February 8, 2021 by Maryland Grows 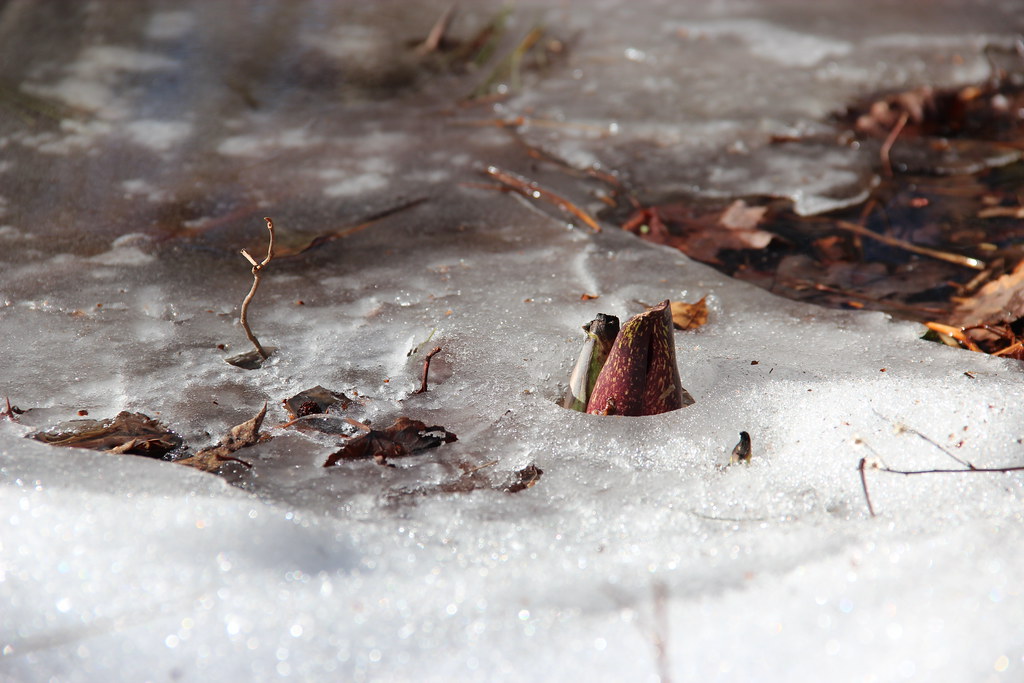 The middle of the winter may seem like an odd moment to think about flowers. In fact, if I look out my window, I can barely see the ground, with most of it covered in snow or ice. So, flowers and all the greenery of spring and summer seem like something that happened in another world which today seems sooooo far away! There are some flowers, however, that defy some of these rules of low temperatures and do a revolution in nature (OK, maybe not a revolution, but still…). In today’s post, and although surrounded by ice and snow, I invite you to join me and warm up using the heat that some plants produce, since we’ll be talking about heat-producing plants!

The short answer is yes, which is super cool in itself. The long answer is yes, but let me tell you how, and what are the advantages of producing heat (and why not all plants do it).

The production of heat in plants is relatively rare, and this feature is found mostly in plants considered to have evolved a long time ago from an ancestor to most living plants. Today, heat production in plants is restricted to groups associated mostly with tropical and subtropical environments, such as water lilies, aroids, palms, and birthworts.

Unlike what we may expect, heat production in these groups has not evolved to keep the plant alive, but rather to help the plant reproduce. In these groups, heat production is associated with floral maturation and in particular to pollinator attraction. In these cases, different parts of the flowers increase their metabolism at a specific point in their development, leading to an increase of temperature that in some cases can be extremely noticeable.

In some cases, the heat has been described as a reward for pollination. (Check out this other post for other “special” rewards pollinators get from plants.) This is because it may occur at times of the year (or the day) when the environmental temperatures drop a lot, and when pollinators that visit the flower could benefit from an extra source of heat.

In other cases, heat is known to promote the release and spread of floral odors, which attracts the preferred pollinators. In many cases where heat production is present, it has been observed that plants also display a way to retain the pollinators, such as floral chambers, and in many of those cases the interaction between the plant and its pollinators involves luring and temporarily trapping the pollinators!

Some arum family plants (here, the European Arum maculatum) temporarily trap their pollinators. The species shown here displays a chamber in the lower part of its “flower” that is closed by hairs (shown on the right), which let the insects in but makes it hard for them to leave. While the flies are trapped in the chamber, the flowers mature, dropping pollen on the flies. These flies will be released after a while, and some of them will be caught again by another plant, leading to the cross-pollination of the species. Sneaky, sneaky! Photos: A. Espíndola.

While it takes a lot of energy from the plants to produce heat, this usually allows them to flower early in the season while other flowers are not around. This reduces inter-plant competition for pollinators, makes the plants easy to find by pollinators, and increases the chances of having pollen be transferred from one flower to another — all of which increases the number of seeds plants are able to produce.

Our very own heat-producing plant, the Eastern skunk cabbage

Skunk cabbages belong to a mostly tropical family of plants, the arum family (Araceae). Fortunately to us, some of them do occur also in more temperate regions like ours (another native Araceae from our region is the beautiful Jack-in-the-Pulpit, Arisaema triphyllum). As with many other Araceae (for example, the titan arum), skunk cabbage attracts their pollinators through the production of a very pungent odor, which gives the plant its common name. And like all Araceae, their flowers have a very special shape that allows them to not only produce but also retain heat.

The skunk cabbage has a typical arum family flower with a bract that covers the central part of the flower. The central part displays all the reproductive parts. In the picture shown here, it is possible to see the yellow pollen exposed on the flowers of this plant. During flower maturation, the reproductive part heats up, reaching temperatures of over 20˚C (about 70 ˚F)! Center and right images show pictures of the flowers taken using a camera able to measure surface temperature, with a color scale that relates shown colors with temperatures. Photos: left: Janet and Phil; center and right: Onda et al. 2008.

When their flowers start to mature, the “head” of the flowers heats up reaching temperatures of about 70˚F (!!!), even if the surrounding temperatures are below freezing. This heating leads to the release of aromatic odor bouquets, formed mostly by compounds rich in sulfides (thus, the stinky odor). Even though this odor may not be the most attractive to us, it is very much so to the skunk cabbage’s favorite pollinators: small flies and beetles that may be lured by the flower “thinking” it is their favorite food or egg-laying site.

In defense of the plant, though, even though the attraction may be slightly dishonest, the lured pollinators may actually benefit a bit from the visit. While some of them may indeed find laying sites on the plant material, most of them will benefit from the heat received, which especially that early in the season is a much welcome reward! This heat also allows the pollinators to become more active and sometimes even mate within the plant’s flower, which also benefits their own reproduction. Finally, and most importantly for the plant, through this heat release and all the insect movement associated with it, insects passively pollinate the flowers, getting covered in pollen and later transferring it to other equally stinky and warm skunk cabbage flowers. Isn’t this super cool?… I mean, warm?

New! Anahí is starting an Extension Blog in Spanish! Check it out here, extensionesp.umd.edu, and please share and spread the word to your Spanish speaking friends and colleagues in Maryland. Bienvenidos a Extensión en Español!

← What can you start from seed in February?
The Garden Thyme Podcast – February 2021 →