What’s the deal with butterfly bushes: Good or bad for pollinators?

The summer is slowly leaving us, with many of us starting to harvest the last wave of vegetables and enjoying the beautiful late summer flowers. At this time of the year, I like to review what happened in the peak of summer and consider what I may want to plant next year, based on what did and did not work this season. I enjoy thinking about how to help pollinators with their favorite plants. I invite you to join me today in exploring how our plant choices are important, using the famous butterfly bush as an example. 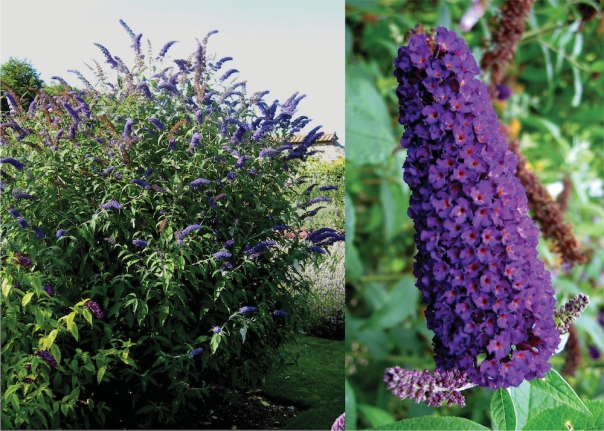 You may have seen these plants with their blue-purple flower clusters poking out of the bush, and a ton of butterflies and bees visiting the flowers as soon as it gets warm and sunny. The butterfly bush (Buddleja davidii) is a plant species that originates in China. Given its beauty and ease of growth, it was popularized as an ornamental plant first in Europe and later on in other parts of the world.

Its popularity has real reasons: the plant grows fast, flowers very early on in its life cycle, and produces flowers throughout its life span of up to 30 years. The flowers smell good, are very showy and pretty, with large clusters that bloom for several days. Because their flowers need cross-pollination to produce seeds (see how this works in this post), these plants depend on pollinators for reproduction. In their natural habitat, pollination is done mostly by butterflies.

After reading this you may be wondering where I’m trying to go with this post. It seems that these plants are great, so there is not much more to say. If I am considering planting something that will be attractive to pollinators and that is easy to grow, this is a no-brainer, right? Well… maybe not; let me explain.

The problem with plants that are too good to be true is that they usually have a down side. The down side of the butterfly bush in our region is that they are so good that they can “take over” other native plants, which has a number of negative consequences.

First, let’s talk a little bit about what I mean by these plants “taking over.” Like all organisms, plants have specific needs to survive in a given place. These needs and abilities evolved over millions of years and are often an evolutionary response to the climatic and soil conditions and the identity of the other organisms living in that community (for example, pathogens, herbivores, pollinators, etc.).

When a foreign species arrives in a new region (like the butterfly bush being introduced in the USA), the fact that they have not evolved in that region can play against them, since they may not tolerate the climate or soils, or may be attacked by parasites or herbivores that they can’t properly defend against. This is why it is often hard to grow species that come from other regions.

Other times, however, not having evolved in the new area can help, especially when most other organisms are not adapted to the species. This means that the new species now does not have to deal with any parasites or herbivores, clearly giving them an advantage over the local species. These advantaged foreign species end up becoming invasive and problematic. Unfortunately, the beautiful butterfly bush is one of these invasive species.

Invasive plants such as the butterfly bush establish and spread quickly across the landscape. Photo: Forest and Kim Starr, Starr Environmental, Bugwood.org

After being introduced into the USA, the butterfly bush is today present and spreading in many regions, including Maryland. This species can reproduce so well, grows so fast, and importantly, has so few herbivores and diseases, that it is able to not only survive, but also spread into new areas at very high speed. Today, the species is listed by the USDA as a weed or noxious weed. It is displacing native flowers as well as agricultural and forest species.

Butterfly bushes get their name for the very large number of butterflies they attract. Here a Pipevine Swallowtail is feeding on the attractive flowers. Photo: Quadell

The butterfly bush not only displaces natives by physically occupying the space that native plants would need to survive. The displacement seems to also come in more indirect ways. Because butterfly bushes offer copious amounts of nectar, they become extremely attractive to pollinators, distracting them from other native co-flowering species, and reducing the native’s reproductive success which eventually also harms the native’s populations. This is something that seems to be happening at least in some parts of the USA, suggesting that by favoring this plant in our gardens, we may be indirectly harming the survival and successful reproduction of many of our dear native plants.

You may remember from my previous posts (What should I plant to help pollinators? and Why do pollinators visit flowers?) that plants support pollinators with resources like nectar and pollen. Although the butterfly bush offers abundant nectar to local pollinators, it has been argued that its nectar is too concentrated and could serve as “junk food.” This is likely inaccurate, since studies of nectar concentration in this species indicate that it falls within the usual concentrations seen in other plants preferred by butterflies (watch out for a future post on the super fun topic of nectar concentrations).
Along with this, many people worry that the pollen may not be as nutritious as that of native plants, and from that respect the butterfly bush may be doing more harm than good to the local pollinators. This is currently very much investigated, and even though it seems that the nutrients in its pollen are not equal to those of native plants, they do contain the essential elements the tested pollinators need.

As we covered in other posts, pollinators do not only consume pollen and nectar. In fact, caterpillars of moths and butterflies feed on other plant parts (e.g., the leaves). In our region, the butterfly bush has little to offer in that respect. Because it is not native to our area, few species of caterpillars can feed and develop on this plant. From this perspective, this plant species is not only physically displacing other native plants that are good hosts of local butterflies, it is also unable to provide the food the local caterpillars need… thus finally harming the butterfly population!

But I want a lot of butterflies… what should I plant?

Despite its name, if we want to benefit butterflies, opting out of the butterfly bush seems like the right thing to do. Instead, plant some of our many beautiful native species. A good place to start for that is my other post: What should I plant to help pollinators?