I’m back with a big update on our raised bed vegetable garden efforts!  It’s been eventful: wildlife has eaten some of the plants, we built a whole new raised bed from scratch, and we’ve begun harvesting some of our first crops.

Our three tomato plants have been growing up well.  We procrastinated on adding support because I wanted a better solution than those flimsy conical wire doodads you can buy at the hardware store.  I eventually located some old lengths of wire fencing and just set them around each plant in a cylindrical shape and then attached them to a single metal garden stake to keep them steady.  I criss-crossed some twine back and forth which will give the tomatoes something more to grab onto and keep the support from bending outward. 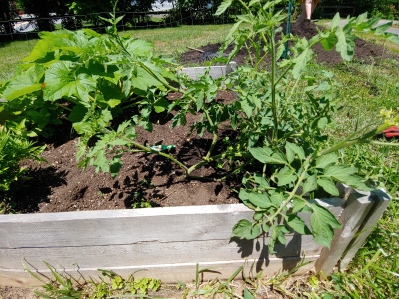 Time to support these tomatoes

Somebody is munching my plants!

Wildlife and insects have been having a feast on our garden, unfortunately.

Insects on our squash and zucchini!

Our zucchini started getting lots of small holes in the leaves, and then huge parts of the leaves went missing.  It looked like someone fired a shotgun at my cucurbit! I was able to find striped cucumber beetles on the leaves.  These guys look like skinnier, orange ladybugs to me. I became more vigilant, picking off the beetles and squashing their eggs.

We also have spotted a few squash bugs and plenty of their eggs underneath the zucchini and squash leaves.

After I was still seeing damage, I purchased some Neem oil to use as a natural pesticide (as recommended by HGIC).  I mixed neem oil with water, shook that up in a spray bottle, and sprayed the zucchini plant with that.  I believe I did see a reduction in damage for a few days.  I need to more consistently spray with it.  I’ve seen less damage, but am still finding the beetles on the plant.  We also began finding groups of squash bug nymphs and eggs under the leaves.  I pulled off and crushed the sections of leaves with eggs on them.  The squash bugs page on HGIC says that the neem oil can be effective against those guys, so I will begin a neem oil campaign against these insects again in full shortly.

The insects seemed to only eat our zucchini, and a little bit of our pitiful cucumber plant.

In addition, our poor zucchini plant may have a squash vine borer issue. We noticed some wilting on some of the leaves, and some of the older branches seemed to be dying.  These branches pulled off very easily and the main stem in the center has a lot of orange junk around it (“frass” is what the HGIC page calls it).  I think I will need to do some surgery with a knife to try to pull out a potential larva like in the below video, but I’m not looking forward to it.  Yuck!  Take a look at this recent blog post on squash vine borers.

Big chunks of leaves were getting munched wholesale from our green beans and our jalapeno plant.  We believe this is either rabbits or groundhog as we see both often in our yard.  It could be deer, but we don’t see many in the neighborhood.

Something ate the leaves from the Jalapeno pepper plant

A few weeks into our gardening project this year, my wife suggested we take on a major expansion project; build a new raised bed (from scratch this time – not hardware store kits) and a gravel path area around our beds.  This was about at the time where we discovered the rodents first eating our crops, so we had to hurry so we can finish the construction and get the rodent fence up.

I’m not particularly handy, but I know how to screw stuff together with deck screws, and I got a circular saw for Christmas a couple years ago that is still sitting in the box, so I decided to build the raised bed with my own basic design.  We ended up building a 12’x4′ raised bed that has three 4’x4′ sections, one being double height.  The wood was 2″ by 6″ pressure treated wood from the hardware store.  I had some wood posts in my garage (came with the house, I think) which I cut up to make joints.

We stapled chicken wire on the bottom of the raised bed to prevent burrowing rodents from finding their way in, and set it down on cardboard to kill the grass below it.  We had a landscaper doing some other work and asked him to get us a delivery of compost we could use to fill it up.

Before we filled it though, I had researched whether pressure treated wood is safe for food gardening.  The HGIC page on Materials for Building Raised Beds states that Alkaline Copper Quaternary (ACQ) treated wood (which is common, and what we used), ” does not contain arsenic, but it does contain copper. It is considered to be low in toxicity.” 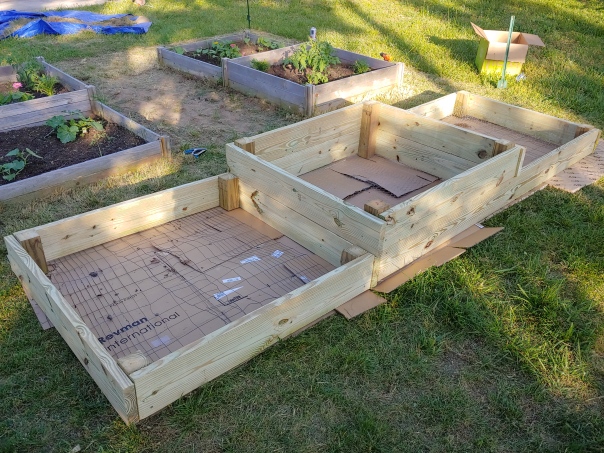 We then created a 20’x20′ border with wood, lined it with landscaping cloth, and shoveled roughly 2 tons of gravel into it.  We added our rodent fence around the border, and I made a step with scraps of wood so we can hop over the fence more easily and then remove the step so rodents can’t also hop in.  Next year, we’ll work on making a gate or more permanent fence solution.  We’ll also see if we need to create a deer fence if crops are still being eaten.

Now that the plants are protected, we planted a couple new cucumber plants in the raised bed and we’re trying corn in the tallest part of the bed.

Our zucchini and squash have grown large despite the pest problems and have been producing fruit for the past couple of weeks.

These were hidden and we didn’t find them until they were quite big!

If we’re not careful and pick at the right time, the squash and zucchini will grow larger than we want.  While huge produce is impressive to look at, I understand that you shouldn’t take too long to pick because a) they will have bigger seeds and won’t be as tender, and b) it wastes energy the plant could be using to create more new fruit growths.

Our tomatoes are just now beginning to produce.  They got very tall and have grown a lot of foliage.  I have been pruning suckers here and there, but I don’t think I have kept up as well as I should have. Some of the lower foliage on the inside has begun to wither so I have been removing those recently.  According to the HGIC website, it looks like this withering may be early blight, and I need to prune to increase air circulation, remove infected branches, and possibly apply a fungicide.

Potentially early blight on my tomato

The first tomatoes produced were near the ground and had some problems.  I tossed the most affected one.  The newer ones coming in look good though! 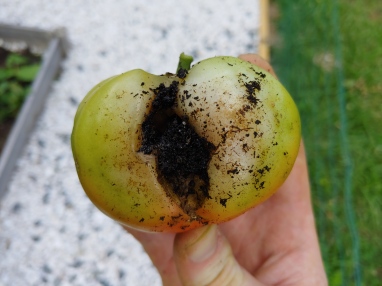 The garden has been a lot of work so far, but mostly that is because of our new construction.  I think we’ve ignored the care of the plants a bit as we’ve been overwhelmed with the building.  We’re hoping to prune better, stamp out insect pests, and hope no mammals hop in and eat our veggies.  We’ll see how it goes and check back in with you in the future.