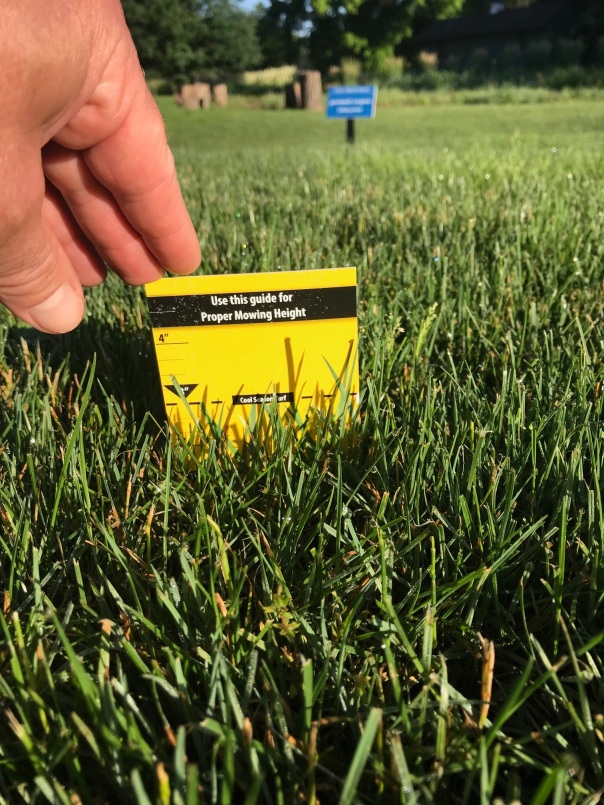 Mowing at 3-3 ½” will reduce the potential for summer weeds. Photo by Geoff Rinehart

With summer right around the corner and gardening season in full bloom, many homeowners have been spending more time outdoors with yard maintenance activities. One temptation is to “want to do something’’ to make your lawn better since it has been a long, cool spring and it has only been in the last few months or so that things have really started growing. However, it’s important to remember that “doing something” for the sake of just “doing something” can have negative consequences, especially as we enter the hot months of summer.

The Home & Garden Information Center (HGIC) has received several questions in the last few weeks about problems, the result of which appear to be “overmanagement.” The most common “overmanagement” mistakes come from mowing too often or too low, overfertilizing (either too much or too often, or not at the right time of year), or overwatering. Each of these can lead to detrimental effects on the health of your lawn.

Below, I’ll briefly provide tips for each of these issues but would like to preface a discussion by noting that most of the lawns in Maryland consist of cool-season species such as tall fescue, Kentucky bluegrass, and fine fescue. Cool-season lawns grow best with nighttime temperatures in the 50’s and daytime temperatures in 70’s. In hotter weather, they usually cannot metabolize enough food stores to compensate for the energy that is burned by the higher respiration rate of the summer. As such, this growth pattern affects mowing, fertilizing, watering, and other maintenance practices. Grasses like zoysiagrass or bermudagrass are warm-season plants that have only really started growing vigorously in central Maryland in the last month or so with the arrival of sustained warmer weather.

Since most lawns in Maryland are predominantly tall fescue and we are headed into a period of slower growth, here are some tips for best management practices for this summer to avoid “overmanagement.”

Mowing—Mow tall fescue at 3-3 ½”. This will allow a greater amount of leaf tissue available for photosynthesis during the time of year when net carbohydrate (food) storage naturally decreases and it will help encourage deeper root growth since root growth is typically proportional to shoot growth. Bonus tip: Be sure to sharpen your mower blades mid-summer. As the summer heat builds and water becomes less available, the grass leaves decrease in water content and become slightly tougher to cut. Producing a clean clip will help the appearance of your lawn. Mowing at 3-3 ½” will also greatly reduce the potential for summer annual weeds, such as crabgrass, from becoming established.

Fertilizing—Growth takes energy. Encouraging your lawn to grow during a time of year when temperatures are hotter than suited will actually take more energy from the plant, leading to reduced root growth and weaker plants in the long term. For tall fescue, plan on fertilizing twice in the fall and once in the spring, no later than early June. More recommendations on fertilizing strategies can be found in the publication “How to Fertilize Your Lawn Responsibly”. If you really want to do something to encourage improved growth in the summer, biostimulants containing plant hormones, vitamins, seaweed or kelp extract, and humic acids can be applied in the summer to help increase drought and stress tolerance. These are usually available in liquid formulations, so you need to have a sprayer and use extra care to properly apply these products. Biostimulant products can be found in local garden centers or via online retailers.

Watering—As of early June, we have had enough rain to erase our mini-drought this spring–and then some. We may hit drier conditions as we get into July and August. Tall fescue has relatively good drought tolerance and even if it is allowed to go “drought dormant” in the summer, it will usually bounce back nicely when it does rain or with the cooler conditions of September. If you do water to avoid drought dormancy, 1” per week via combined rainfall and irrigation is sufficient. Remember that while some water is good for growth, grasses don’t like it wet all the time, so apply the 1” of water per week in two or three waterings where you would water “deeply, but infrequently”. Watering too frequently (or too much!) can waterlog your soil and discourage beneficial soil microbes which need oxygen to do their best. In addition, light, frequent watering can create an environment that favors turfgrass diseases like brown patch. So if you water, let your soil dry out between waterings and let it breathe!

← Bottlebrush Grass – Gorgeous Native Ornamental For Your Garden
Bees Making Holes in Your Yard? They Could be Gentle Pollinators: Meet The Cellophane Bee →