Why Is Leyland Cypress Turning Brown? Winter Took Its Toll 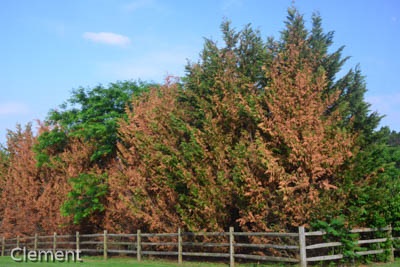 Leyland cypress (x Cupressocyparis leylandii) has a lot going for it. It’s fast-growing with evergreen, feathery foliage and a pleasing, slender profile. It makes an excellent specimen tree or screening plant. A cross between two Pacific coast species, the Leyland cypress thrives best in moist, cool climates with moderate temperatures. These trees are hardy to zone 6, however, they do not tolerate sudden temperature fluctuations. We indeed experienced some of these very cold sudden temperature fluctuations this past December and January. The first winter damage symptoms will begin showing up as browning and dieback this spring as temperatures begin to warm and stimulate new growth.

Since Leyland’s are often used for screening and windbreaks they are frequently exposed to temperature extremes and windy conditions that lead to drying out and cold damage. One of the weaknesses of Leyland’s is their shallow root systems which makes them susceptible to stress through desiccation. Another weakness is the dieback and death of the water-conducting tissue and cambium layer just under the bark during extreme winter temperature fluctuations.

There is no actual treatment for winter damage on Leyland cypress. Before pruning, allow the damaged tree to begin new spring growth. Often, if the damage did not injure the branch, new growth will emerge and the browned needles will drop off naturally. If new growth does not emerge, the branch was severely damaged and should be pruned above where green color is still visible. Leyland cypress trees are tolerant of heavy pruning, but if more than one-third of the tree is damaged, the tree may need to be replaced. 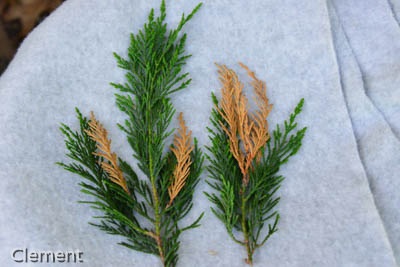 Winter cold injury can often lead to greater infections from a few common fungal diseases that affect foliage, stems, and branches such as Seiridium and Botryosphaeria cankers, as well as Cercospora needle blight. Symptoms of canker diseases include branches that start to turn yellow to reddish-brown. Closer examination will reveal slightly sunken cankers, with resin exuding profusely several feet down on the infected branch, usually closer to the main trunk.

The fungal cankers spread primarily by releasing spores during rainy spring weather. The rainwater will carry the fungal spores to other branches. Infection on multiple branches throughout the tree or on the main trunk can kill the entire tree. The only known cure for Seiridium or Botryosphaeria cankers is pruning the infected branch below the infected area.

In the future, it would be best to diversify evergreen borders with a variety of evergreens and deciduous plant selections rather than just one species.

Have a plant or pest question? University of Maryland Extension’s experts have answers! Send your questions and photos to Ask Extension.

← What Can I Do About My Neighbor’s Plants Coming Onto My Property?
The Cure for All Your Ills Might Just Be A Native Plant →

One Comment on “Why Is Leyland Cypress Turning Brown? Winter Took Its Toll”