Last week my neighborhood hosted the traditional Christmas tree lighting event. Usually this event involves lighting the large Christmas tree across my street, having Santa come visit the kids on the firefighter truck, and sharing a cup of warm chocolate while chatting with the neighbors. This year, things were a bit different, with the lighting being live broadcasted, Santa parading the neighborhood on a truck, and chocolate being picked-up at one of our neighbor’s yard and enjoyed at home.

I have been since thinking a lot about this event, and how important it is to maintain the social ties in our neighborhood. However, I also have been thinking a lot about how the food at this event is almost as important as the event itself; how the chocolate was not left out of this year’s modified event. And this made me realize yet again how foods are central to our social ties, and how losing them would also make us a bit lonelier. So today’s post, the third in our comfort foods series, will be about that food that was so important to my neighborhood this past weekend: chocolate. Join me today in exploring how cacao comes to be, and how partnering with nature helps its (re)production. 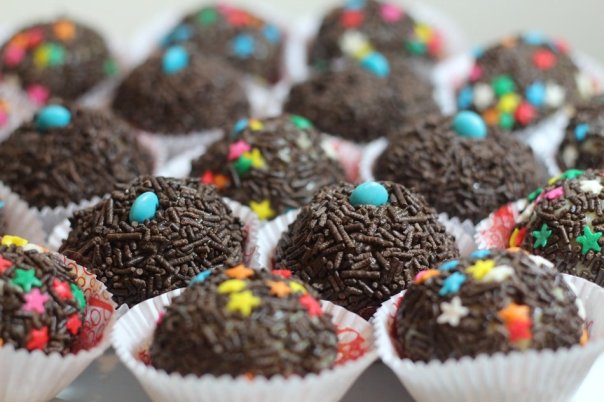 The cocoa we find in the chocolate we eat and drink comes from beans of the cacao tree, a small tree in the mallow family. As for the other comfort foods we talked about in my last two posts (spices and vanilla), cacao is also not grown in the USA, and thus has to be imported. (Interestingly, it also has to be 100% imported into the countries we usually associate with chocolate, like Switzerland and Belgium.) Cacao, indeed, can only grow in very humid rainforests and can only be cultivated close to the Equator. Today, the major producers of cacao are in West Africa (e.g., Ivory Coast, Ghana) and the Americas (e.g., Ecuador, Brazil). 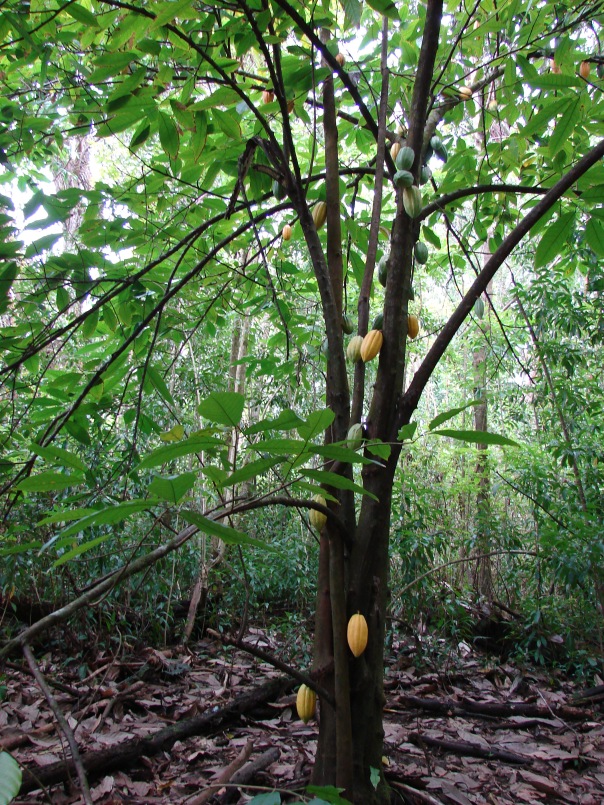 The plant of cacao, Theobroma cacao, is a small tree naturally occurring in South and Central America. The fruits of cacao plants grow directly attached to the trunk. Photo: F. and K. Starr

Even though cultivated in Africa, the cacao plant originates in South and Central America, where the species grows in the wild. Studies demonstrated that the wild plant was domesticated one or two times, first about 5,000 years ago in the Amazon, and about 3,500 years ago in Central America.

Although, as I said before, cacao beans are the central ingredient of chocolate, it is suspected that the first uses of cacao were not based on the consumption of their beans, but rather of their pulp, which is sweet and readily ferments to produce alcoholic beverages. Researchers believe that the use of beans for making the chocolate drinks the first Spaniards saw Aztec emperors drink was indeed a secondary use of the fruit.

How is cacao produced?

Unlike many of the crops we eat, most of cacao production is done by small-scale farmers. Being small trees, cacao fruits are produced in cacao orchards, usually established in areas previously occupied by rain forests. The fruits grow directly on the trunk of the tree, and need to be harvested regularly, since all fruits do not ripen at the same time. Once harvested, the fruits are cut open, and the pulp and beans are separated from the husks. While the husks are discarded, the beans are left to dry out, at which point they become dark and start looking like the little pictures we sometimes see on our chocolate bars. 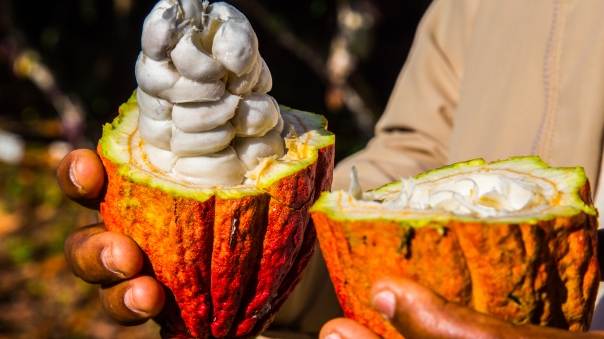 The fruits of cacao are large husks that contain the beans and a sweet pulp. Note the violet/whitish color of the fresh beans, which will eventually turn brown after drying. Photo: Presidencia República Dominicana

As we see, a central part of cocoa production (and us getting the yummy chocolate we like) is the production of fruits, which seems to be defined by many aspects of the production. On the one hand, poor soils lead to yield reductions. Interestingly, cacao trees are adapted to growing in the understory of the rain forest and for this reason had been initially grown under other trees. However, once it was observed that their productivity increased if exposed to full sun, the accompanying trees started to get cut off, further contributing to the deforestation of the rain forests where they are usually grown, and increasing the monoculture of cacao plants.

After some years of higher yield, farmers realized that their trees became less and less productive, and came to understand that the presence of other trees in the orchards maintained the nutrients in the orchard’s soil, what eventually benefited fruit production. Today, in order to maintain yield and sustain the soils, cacao is recommended to be grown in what is called agroforestry systems, meaning that orchards are interplanted with other trees, which enrich the soil with nutrients, and provide a more natural shady environment in which the cacao trees can grow. The little label with a frog that we see on some certified chocolate packages indicates indeed that the farms where the cocoa used in that chocolate was produced following such environmentally friendly practices. Interestingly, as for many environmental practices, it was shown later that using agroforestry methods for cocoa production was not only beneficial to soil fertility; it also indirectly improved fruit pollination, thus improving yield through different paths! 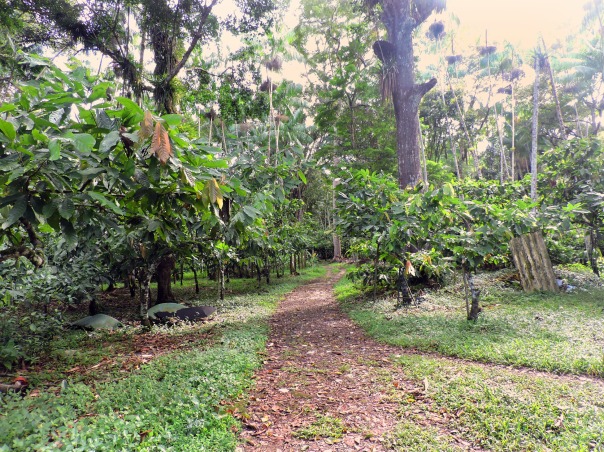 Agroforestry practices allow cacao plants to grow under the canopy of larger trees. This improves the quality of the soil, promotes the presence of pollinators, and leads to higher yield. Photo: J. Rocha, from Rocha et al., 2019

How is cacao pollinated?

Why am I talking about pollination if I was just talking about planting trees? There’s a relationship, I promise! Let’s back up a bit. Unlike other crops (e.g., pecans) most cacao plants need to be cross-pollinated to produce pods and beans. This means that most cacao varieties need to receive pollen from another plant to produce fruit. In the case of cacao, the pollen cannot be transferred by wind, which makes animal pollinators central to cocoa production. In a surprising turn of events, even though we tend to think about pollinators as bees or butterflies, this wonderful fruit is mainly pollinated by a very unexpected organism: a biting midge! 🤯

Midges of the genus Forcipomyia are the main pollinators of cocoa flowers. These tiny flies visit cocoa flowers and get covered in pollen, as seen in the picture on the left. Photos; left: S. Forbes; right: C. Quintin

Males and females of a group of midges (genus Forcipomyia) act as the main pollinators of the small cacao flowers. These midges visit the flowers to feed on nectar and pollen, which provides energy to the insects and helps females in egg production. While moving from flower to flower to feed, they transfer pollen between flowers from different trees, and increase fruit production. From this perspective, we need to thank these midges for the delicious chocolate we eat and drink!

And this is where planting trees relates to pollination. These midges prefer to develop on humid and shady environments, using leaf litter as a laying site. Making the soils shadier and increasing their leaf residues, agroforestry practices in cacao plantations directly benefit midges’ populations… and cacao production! Thus, through increasing the diversity of trees in these plantations, farmers can both make the soils provide nutrients for the plants to grow, and maintain large midge populations that ensure the effective pollination of cacao flowers. Isn’t it impressive what we can accomplish when we work with nature? And I mean, isn’t chocolate worth it?