Ground Beetles are Beneficial in Your Garden 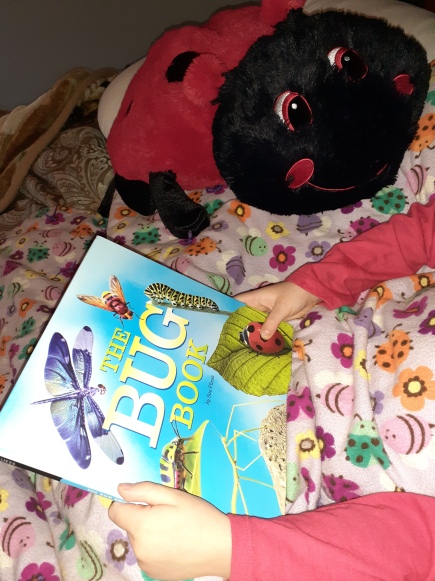 Ashley’s daughter with her bug book. Photo: A. Bodkins

A few months ago, my daughter was gifted The Bug Book, by Sue Fliess. It highlights many insects and has wonderful, very detailed pictures, with few words, which makes my bug-loving 4-year-old quite happy. It quickly became one of our favorite bedtime books. There are several different beetles pictured and mentioned in the book, which made me think about the amazing and complex group of thousands of species of beetles that are classified as “ground beetles”, so named because they are found living and occupying the surface of the ground.

Did you know that ground beetles are beneficial in your garden? These critters might be hard to see as they are good at hiding and staying out of site. A very beautiful and common ground beetle you might be able to spot this spring is the bright green, Six-Spotted Tiger Beetle. For additional information about this and other common beetle species found in Maryland, visit the Home and Garden Information Center’s page about predatory beetles. 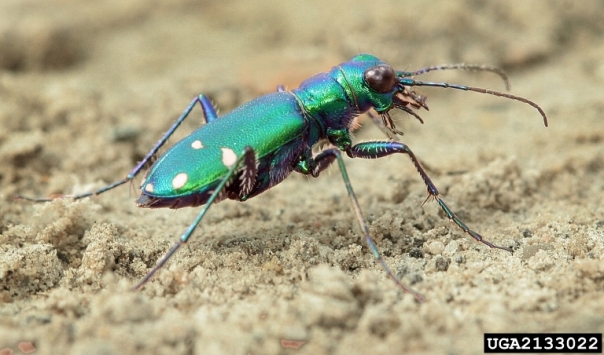 The Six-Spotted Tiger Beetle is on of the common types of ground beetles found in Maryland. Photo: David Cappaert, Bugwood.org

All beetles are in the insect order of Coleoptera, which is the largest order in the animal kingdom! Coleoptera refers to the hardened front wings which protect the membranous hind wings held underneath. Within this large order are thousands of different families, which include everything from lightning bugs, wood boring beetles, ladybird beetles, cucumber beetles, and also the family of Carabidae, which is where the beneficial ground and tiger beetles fall in the classification.

Ground beetles range in size from 1/8 of an inch to over 1 inch and can be brown, black, or metallic green or blue in color. Often these are the critters that you see scurrying away when you pick up a rock or item that has been sitting on the ground.

They are most active at night and are responsible for eating anything from snails to slugs, root-feeding insects, as well as weed seeds. They are generally referred to as being opportunistic feeders, which means they will consume a variety of items as they come across them. It is estimated that ground beetles can consume up to their body weight daily in food.

Some interesting research that is outlined in a Penn State fact sheet, Ground and Tiger Beetles (Coleoptera: Carabidae), says that ground beetles consume weed seeds from agriculturally important weeds, such as common ragweed, common lambsquarter, and giant foxtail (Lungren 2005). Their preference for different types of weed seeds could be linked to oil content and size of seeds, which limits which varieties they can move easily. The research points to the fact that these beetles would not be able to eliminate a weed species, but rather help to change the number of seeds in a certain area and give other plants more of a chance to receive the needed light, nutrients, or water. 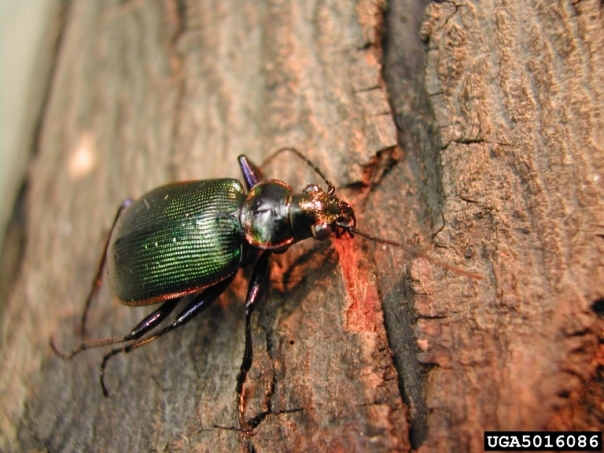 These amazing critters can live in many different ecosystems, and some species are specific to certain habitats. They go through a complete metamorphosis with four life stages including egg, larva, pupa, and adult. They typically have one generation per year. One female can produce anywhere between 30 to 600 eggs!

You can do your part to help promote this group of beneficial beetles in your garden by not tilling the entire garden at one time or providing areas of protection during a tillage event, with a protected area or walkway that is covered in mulch, or perhaps by planting a strip of pollinator plants or perennial herbs that would benefit all beneficial insects. These protected areas provide much needed moisture, food sources, and habitat. Of course, in order to protect all our ground dwelling beneficial insects, you should avoid applying soil insecticides.

If you want to learn more about how to conserve ground beetles in your garden, check out this publication on “Natural Enemies in Your Garden” from Michigan State University. Also, University of Maryland Entomologist Dr. Mike Raupp has a good piece about ground beetles on his Bug of the Week website.