Seeds to Die For

Posted on November 9, 2018 by Maryland Grows

In the 1900s, Nikolai Vavilov studied botany and agriculture. He researched ways to make crop plants more disease resistant, drought tolerant, and higher yield. Working on behalf of the Institute of Plant Industry in Leningrad, he and his staff traipsed through villages, jungles, and savannahs around the world, collecting seeds from crops and their wild relatives. They were after the genetic diversity needed to breed new crop varieties. There was an urgency to their work; as populations of heritage varieties and wild plants cross-pollinated with modern cultivars, precious genetic diversity was lost. Their hard-won collection constituted one of the world’s first seed banks.

The Vavilov Institute is an active genebank in the city now known at St. Petersburg. You can visit them at http://www.vir.nw.ru. Photo Credit: D.T.F. Endresen via flickr. March 2002

Photo Credit: The Siege of Leningrad. English: “In a street of Leningrad after German air raid”. Photographer Boris Kudoyarov, Jan. 1, 1942. Provided to Wikipedia by the Russian International News Agency.

During World War II, Hitler’s troops laid siege to Leningrad for two and a half years. Many citizens died as the result of air raids, artillery fire, and in the second winter, as many as 100,000 people died of starvation each month. The scientists of the seed bank secreted parts of the collection away and took shifts protecting the remainder. As food became scarce, they pledged to each other never to eat the seeds in the collection. The seed collection survived, but nine of the scientists starved to death, surrounded by envelopes of beans, corn, oats, wheat, and rye.

The effort to secure the DNA of the world’s flora in seed collections continues today. Here are the world’s largest seed banks and how they continue the struggle to save the DNA needed to protect the future of our crops and natural areas: 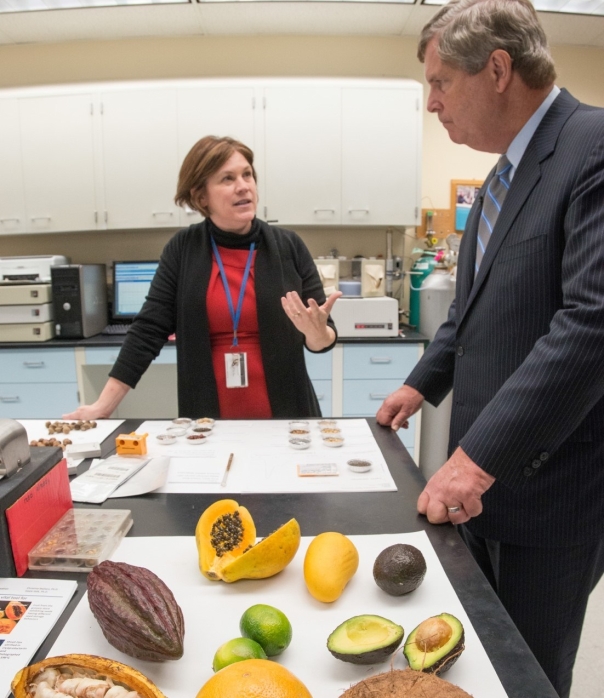 USDA Agriculture Research Service genebank lead scientist talks with Secretary Tom Vilsack during his 2013 visit. Some of the current fruits being studied are displayed on the counter. Photo credit: Lance Cheung, USDA.

The USDA’s genebank in Colorado is one of the largest in the world. They use the term “genebanks” because they store pollen and other plant parts involved in growth and reproduction as well as seeds. They also conduct research to improve the effectiveness of gene storage methods. Their cold room contains seeds preserved in vacuum sealed envelopes, stored on shelves at -18C (0F). These seeds have a shelf life of 20 to 50 years. The cryogenic vault area stores seeds in tanks cooled with liquid nitrogen. These seeds are expected to remain viable for hundreds of years.

Working in partnership with countries around the globe, the Kew Botanic Gardens in London operates this seed bank focused on the conservation of native plant species of the world. Their mission is to provide an insurance policy against the extinction of species. Their initial focus is on dryland species. Dryland habitats will become drier with climate change, pushing many of these species beyond their tolerance range. At the same time, many moderate sites will become drylands, and these species will be needed to revegetate those areas. As of June 2015, Kew had succeeded in acquiring 13% of the world’s vascular plant species.

Svalbard is a gift to all of us from the Norwegian people and the Bill and Melinda Gates Foundation. Buried deep in a mountain on an island in northern Norway, Svalbard’s mission is to serve as a backup storage facility for the world’s other seed vaults, protecting them from the ravages of war, storms, fire, and war. Seeds are from both the USDA and from the Vavilov Institute. The staff of the seed bank in Leningrad would have appreciated Svalbard’s mission.

Resources on Seed Saving from the University of Maryland Extension

← Monthly Tips for November
The Nativar Dilemma: The Case of My Purple Ninebark & The Leaf Beetle →