John and Julian begin work on a teaching garden at the Jane Gates Heritage House in Cumberland, Maryland

The Jane Gates Heritage House located on Greene Street in Cumberland, Maryland is a non-profit museum and community center started by John and Sukh Gates to honor the spirit of John’s third great-grandmother, Jane Gates (c. 1819 – 1888). Jane lived most of her life enslaved, most likely in or near Cumberland. She obtained freedom when slavery was abolished in Maryland in November 1864. 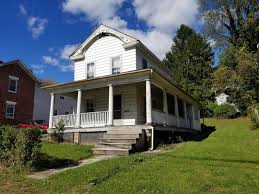 Jane purchased the house and lot for $1400 in 1871 in the current location of 515, 511, and 509 Greene Street. Jane Gates is listed in the 1870 U.S. Census in the house at 515 Greene Street as a nurse and a laundress, age 51, living with two of her children and two grandchildren. The house at 515 is Jane’s original dwelling. The houses at 511 and 509 were built decades later by one of Jane’s daughters and a granddaughter. Jane Gates is also the second great-grandmother of Dr. Paul Gates and his brother Henry Louis Gates, Jr., a scholar of African American culture at Harvard University and host of the PBS program, “Finding Your Roots.” Jane’s house is featured in his PBS documentary, “African American Lives II.”

The mission of the Jane Gates Heritage House is to empower, enrich, and enhance the lives of all through faith, education, and history. Along with African American history, the President of the board of directors, Sukh Gates, is passionate about teaching elementary-aged children crucial life skills such as healthy living and growing and preparing food.

To reach this goal, Sukh wanted to transform the backyard of the house into a teaching garden. She asked for help from the Master Gardeners in Allegany County to design and install the garden. I developed a plan based on Sukh’s goals and the available land at the house. The plan called for four raised beds for vegetables, a small bed for fruit along an existing wall, and a pollinator garden along the fence that borders the alley.

The Jane Gates Heritage House received a grant from the Maryland Commission on African American History and Culture to renovate the house but not the grounds. Sukh and I applied for a grant from the Allegany Work Group of the Western Maryland Food Council to build the raised beds. In March 2020, the Food Council awarded $600 to cover the cost of materials and soil. Josh Frick, my husband, constructed the raised beds on site. Our families then worked together to install the raised beds and fill them with soil. In June, Master Gardeners donated and planted fruit, vegetables, herbs, and flowers in the gardens. The local wildlife posed quite a challenge, prompting the Gates family to erect a fence to protect their fledgling garden. By mid-July, Sukh excitedly picked the first zucchini.

This project fostered a growing friendship between Sukh and me and our respective organizations. I regularly consulted with Sukh over the summer and into the fall. Sukh, new to gardening, was amazed by the beauty, the challenges, and the serenity afforded by the garden.

In the course of inspecting the pollinator garden for weeds, I noticed a plant that I hadn’t paid much attention to before. This plant looked familiar, like a flower of some kind, but it had not been planted by Master Gardeners. It was a volunteer that had re-seeded and spread itself from times past. It grew along the alley behind the house. I pondered this a while, and it finally came to me. This plant is soapwort!

Soapwort, whose botanical name is Saponaria officinalis, may be more familiar to you as bouncing Bet or wild sweet William. European colonists brought soapwort to America because it had several essential uses. Sap from the roots and stems can be combined with water to create a lathery soap solution traditionally used to clean delicate textiles and woolen fabrics. This plant naturalized throughout North America. Further inquiry reveals that bouncing Bet (Bet is short for Bess) is an old English nickname that means washerwoman. The hook was set; Sukh and I wanted to learn more. 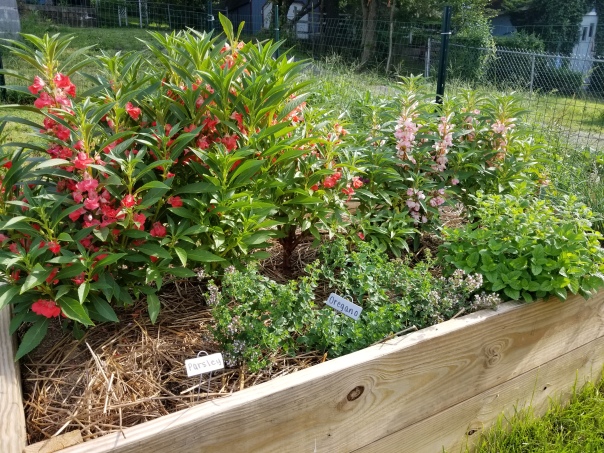 This discovery prompted Sukh and me to learn more about 19th Century laundering techniques. In the 1800s, the boiling of textiles in a large kettle was part of the laundering regimen. An archeological dig in 2019 led by Oxbow Cultural Research principal Suzanne Trussell found remnants of burned wood behind the house, near to where the soapwort grows. The wood was in the ground at an angle, which may indicate Jane used a tripod to hold a large kettle over a fire. Could this have been the spot where Jane spent long hours laboring? Could Jane have planted the soapwort nearby because she used it as part of her cleaning process? We can’t know for sure, but it’s fascinating to consider.

Finding soapwort created a lead-in to explore Jane’s life as a laundress and to search for further relevant connections. The more we delved into history, the more Jane Gates came alive. Jane’s probable daily routines, methods, and challenges became clearer. Suddenly the life of Jane Gates became tangible. This is the mission of the Jane Gates Heritage House, after all, to learn from Jane by connecting the past to the present. The providential discovery of this inconspicuous plant shed light on the life of this remarkable woman, Jane Gates, and for that we are grateful.

← Why is my oak tree dying? Featured Video
Hot cocoa, bugs, and forests →