What’s humming in your garden?

The summer is here, and one of the big pluses of it is that it brings a bunch of new visitors to our region, some of which are the whimsical and hungry hummingbirds! In today’s post we’ll talk about these lovely birds, why they eat so much, and what we can do to help them while they visit our region.

Hummingbirds are a group of birds that are specialized in feeding exclusively on nectar, even though they also supplement their diets with some insects they may find in the flowers they visit. Globally, hummingbirds are restricted to the Americas, meaning that they can only be found in the Western hemisphere (lucky us, Marylanders!). Because they visit flowers, they act as pretty good pollinators, to the point that they are considered among the largest group of vertebrate pollinators.

Ruby-Throated Hummingbirds breeds in Maryland and often can be seen during the summer in our region. Here we can see a male. Photo: M. L. Reynolds.

Why do hummingbirds eat so much?

You know that story about the hungry caterpillar? Sometimes I think the story should actually be about the hungry hummingbird! In fact, hummingbirds are record breakers, being the animals with the highest metabolic rate of the whole animal kingdom! In fact, this tiny animal uses about 100 times more calories per gram of body weight than elephants! For this reason, hummingbirds need a lot of energy to survive and are always hungry, needing to consume about their body weight of food on a daily basis (imagine what eating that much food would look like for us).

What do hummingbirds eat?

And talking about collecting nectar, you may have realized that hummingbirds have very long beaks. What you may not know is that their beaks and tongues have evolved to have incredibly adapted shapes that make nectar collection a very efficient process. First, a hummingbird has a strong set of muscles that allow it to perform up to 20 licks per second! Also, the edges of a hummingbird’s beak slightly overlap, which easily creates a tight structure from which the nectar may not drip off when it’s being ingested. More impressively, the tongues of hummingbirds have longitudinal ridges and its edges are bent towards the center, creating ‘channels’ that act as straws. Finally, the tip of their tongues is split longitudinally in two and covered in small ‘hairs’, which allows the bird to capture as much nectar as possible in each licking. If you want to see this by yourself, check out this awesome video. 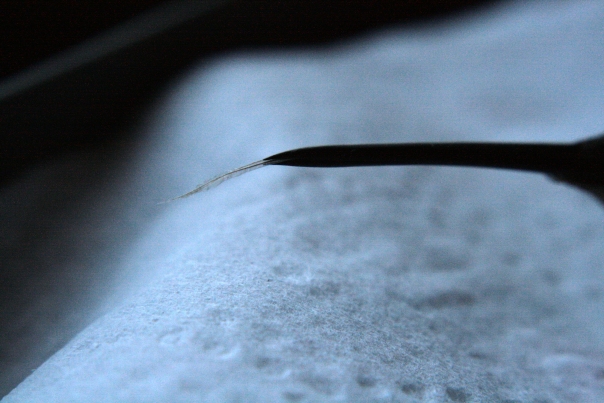 A hummingbird’s tongue is forked at its tip, which allows them to increase the volume of nectar obtained per lick. Photo: L. M. Stephen.

What flowers do hummingbirds visit?

Hummingbirds have exceptional vision, able to see the same colors we do, but also the UV spectrum. However, hummingbirds visit mostly red, pink, and sometimes whitish flowers. Why is this? Is there any special sign in red flowers that they prefer? In fact, their color preference is not innate, and hummingbirds learn to identify flowers of what color are the best sources of nectar. Because most red flowers are not attractive to other pollinators, those flowers have the most nectar still available for them to collect. For that reason, when given the choice, hummingbirds will choose red or pink flowers, not because those are the only ones they are able to see, but rather because those are the ones they know are the most likely to offer the most food.

Some of the flowers one can plant to attract hummingbirds in our region have red elongated flowers, such as cardinal flowers (left), columbines (center) and bee balms (right). Here we can see females visiting these plants. Photos: B. Buchanan/USFWS, G. Smith/USFWS, J. Schneid.

On the side of the flower, being pollinated by a hummingbird requires special structures to protect its reproductive organs from the visit of a pollinator as large and mobile as a hummingbird. For this reason, hummingbird flowers are usually elongated and a bit stiff, at least at their base, where the ovaries are. Hummingbird flowers also have evolved to position their anthers in a very specific way, so as to allow optimal pollination. Hummingbird flowers usually deposit pollen on the beaks or foreheads of hummingbirds, and hummingbirds have been shown to be exceptionally good pollen dispersers! 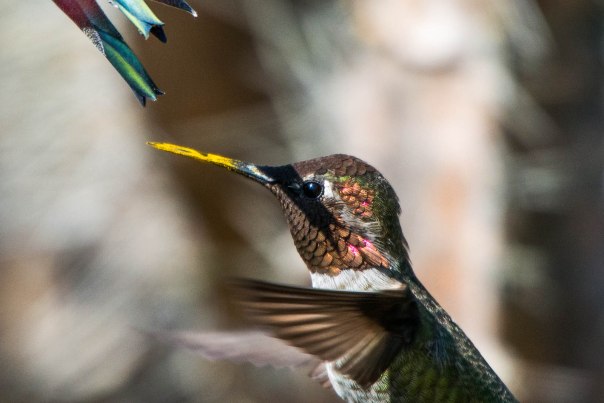 Flowers visited by hummingbirds deposit their pollen on the heads or beaks of their favorite bird visitors. Photo: Kpts44.

How can I help hummingbirds?

If you would like to attract hummingbirds to your yard and help them survive and thrive in your area, there are some very simple things you can do. The simplest one is to plant flowers that hummingbirds prefer. In our region, those can be jewelweeds, cardinal flowers, bee balms, columbines, or trumpet creepers.

Another way to attract them (ideally in combination with planting preferred plants) is by setting up hummingbird feeders. These can be obtained at many stores and are to be filled with a 1:4 solution of sugar in boiled tap water. The only condition for this is that the solution has to be changed regularly because it will start fermenting and will turn bad after 3-4 days. If you keep the solution fresh, there is no down side on having it always available in your yard. To know more about these feeders, the Audubon Society has a neat website with a lot of information. This will both help the hungry hummingbirds get enough food and will allow you to observe their beauty from the comfort of your own window.

2 Comments on “What’s humming in your garden?”