Wheel of Munchin’: Assassin Bugs in the Garden

In my college entomology class, I was required to put together an insect collection. At that time, I had no idea how handy that insect collection would be! I use it regularly now to show children in schools cool insect critters and also to share with Master Gardeners!

Luckily, at the time, I had two younger cousins who absolutely LOVED helping me gather insects. One of the critters they found for my collection was a wheel bug, which is a type of assassin bug. Have you ever seen this awesome predator?

Just as the name states, it has spikes on its thorax which, to me, resemble dinosaur armor or maybe for the less creative thinker, spokes of a half-wheel. The saliva of the wheel bug contains venom that paralyzes the victim when pumped through the wheel bug’s beak after it silently stalks its prey and sticks the beak into them. The insect world can be a little gruesome! The digested body fluids of the prey are then sucked into the wheel bug’s stomach through another channel in the beak. 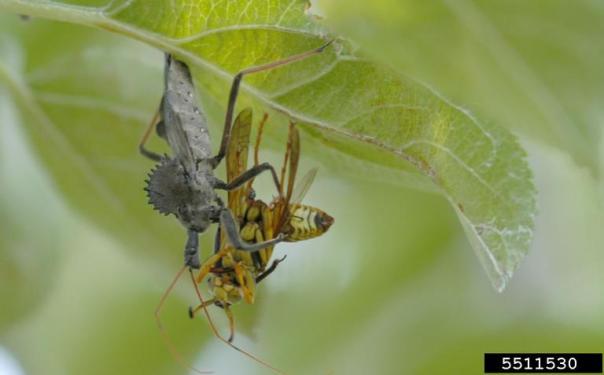 Wheel bugs are active during both the daytime and nighttime and are often considered shy and hide under leaves, so it is not too surprising to hear that most gardeners have never encountered this amazing insect!

According to the Maryland Home and Garden information Center, there are over 160 species of assassin bugs in North America, most of which survive the winter as adults in sheltered locations. All species of assassin bugs (family Reduviidae) are general predators that attack anything that comes across their path. This includes a wide-variety of insect pests in our gardens, such as caterpillars, beetles, true bugs (e.g., stink bugs), sawflies, and aphids. Unfortunately, they could feed on beneficial insects such as ladybird beetles, spiders, and honey bees too, if the opportunity presents itself.

Assassin bugs have a distinct “neck” that connects a small head with large eyes and sturdy beak that they use to pierce into their prey. They are considered true bugs, so they have 6 legs, three body parts, four wings, piercing-sucking mouthparts, and go through incomplete metamorphosis. That means the young bugs or nymphs look similar in shape to the adult, but they can be a different color. Sometimes the nymphs are mistaken for spiders because of their long legs.

Assassin bugs are good for our gardens so no control is necessary, although they can bite humans, so care should be taken to avoid picking them up or handling them. Usually they are not found in large numbers, just a few here and there. If you are lucky enough to find one in your yard or garden this year,  take a picture and share it with a friend or family member! Let everyone know how awesome gardening is and how there is always a new “friend” to discover!