As a non-soil scientist who loves to explore and learn about soil, I was quite shocked to read last year that humus, as it’s commonly understood, does not exist in nature.

What, no humus? How can that be? What is it then that makes up the bulk of soil organic matter? This fascinating story unfolded for me through an excellent 4-part soils podcast (“Priming for Production”) produced by Natalie Lounsbury in November 2017. The podcast can be found on Natalie’s notillveggies.org website which was funded with a Northeast SARE grant. (Hey, Master Gardeners, these podcasts count for Master Gardener continuing education hours!)

From the beginning of time, humans have marveled at the power of soil to support plants and animals. Late 18th century scientists discovered they could extract a dark colored liquid when they treated soil in the lab with sodium hydroxide (pH 13) and then acidified the extraction. They called the compounds they created humic substances and concluded they came from a special soil component– humus. Current research is countering the long-held notion that plant and animal residues, broken down in soil, are synthesized into large, stable, and complex colloids (humus). The latest analytic tools available to researchers do not detect humus or humic substances in soil. Neither seems to occur naturally. Wow. 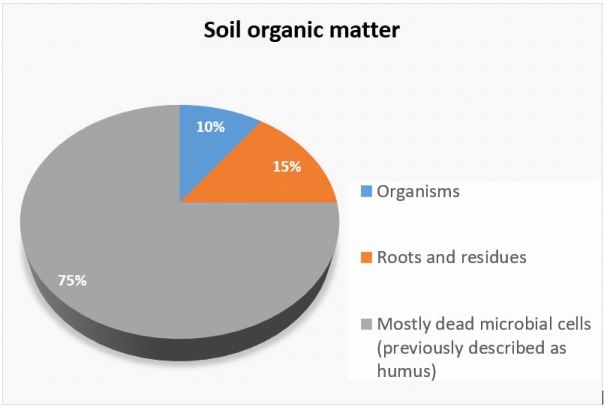 An emerging replacement for the humus model contends that carbon flows through plants, soil particles, and microorganisms and that soil organic matter (SOM) is a continuum of decomposing, ever-cycling organic compounds ranging from plant fragments and soil invertebrates to microbes and acids. This research is essential for addressing climate change and food production because organic matter is 50-60% carbon and there is more carbon in SOM than in all plant life and the atmosphere combined. Building up soil organic matter reduces the amount that would be lost as CO2.

The mantra “feed the soil” to “feed the plants” has led gardeners to add lots of plant residues, compost, manure, etc. to fuel the soil food web. Research findings highlighted in Natalie’s podcast suggest that our focus should be on managing soils to optimize microbial life and that year-round living roots are key to feeding microbes that build soil organic matter in the rhizosphere and store carbon.

I was eager to get Natalie’s take on some of the research findings and ways that gardeners can apply the new information. I met Natalie when she was a Masters student at UMD, working under Dr. Ray Weil on tillage radish cover crop research. Natalie is now working on her Ph.D. in soil science at the University of New Hampshire where she’s continuing to investigate cover crops (“…cover crops are too exciting to leave”) and no-till vegetable techniques.

Natalie: There is still some controversy over this. It’s not like everyone has embraced the concept that humus is dead. Some continue to use the word. I think it’s confusing because humus comes with connotations and associations. I choose to say soil organic matter instead.

Jon: One of the fascinating things I picked up from your podcast is that dead microorganisms make up a huge part of soil organic matter. So the 75% of soil organic matter that we thought was this mythological substance known as humus is really just carbon compounds recycled through microbial populations.

Natalie: Yes, the inputs come from plants that are processed by microbes. They die and get re-processed. It’s mostly microbial by-products and dead cells.

Jon: So what should farmers and gardeners be doing differently?

Natalie: This new thinking doesn’t change our soil management recommendations much- we still recommend minimal soil disturbance (tillage), keeping the soil covered, and adding a diversity of organic inputs. What has changed a bit is our understanding of how important inputs coming from living plants, like root exudates, are in order to feed the microbes. Microbes are ubiquitous and are active even at very low temperatures. We just need to give them the conditions to thrive by providing them with simple carbon compounds year-round. This is why cover crops are so great.

Jon: What suggestions do you have for gardeners who may be wary about or unfamiliar with cover crops?

Natalie: Winter-hardy cover crops can begin to grow vigorously again in spring. So if you don’t want that, maybe try a cover crop that will easily winter kill like oats, or try using a tarp to kill your cover crop. Using a tarp to kill your cover crops can also allow you to let the cover crops grow big without fear of what to do with them, or how to incorporate them. Once killed, they make a great mulch and you can no-till transplant straight into it! And don’t think of cover crops in a limited way, that you have to remove all of your crops in September to plant cover crops. You can allow your late veg crops, like kale and arugula to overwinter. They become the winter cover crop. You can under-sow crimson clover or red clover around your tomato plants in September. If you need a fine seedbed in spring, you can spatially organize your winter cover crops. For example, plant forage radish in a strip where you want your vegetable rows in spring. The plants will be fully decomposed by spring making planting easy.

Thanks, Natalie. Lots of food for thought! Please check out the podcast and other resources to learn more.

3 Comments on “Improve Your Soil by Growing Soil Microbes”