This has been a tough year for bean-growing, at least around these parts; both the Derwood Demo Garden and my community garden have seen large populations of Mexican bean beetles, as well as hungry rabbits.

The above images (photos by Robin Ritterhoff) are of newly emerged adult Mexican bean beetles. Their color will darken to the familiar mustard shade (more Dijon than yellow), but isn’t it cool to catch them in this developmental stage? Though having found these easily shows how many we have at DDG, sigh. You can read more about Mexican bean beetles here.

I decided to grow my beans at home rather than in my community garden plot, and for the first time I took the extra precaution of keeping them covered to keep away beetles and other pests. Beans are self-pollinating; they don’t depend on bees or other insects to transfer their pollen from flower to flower, and so they will develop even when kept under cover. I have a VegTrug raised planter on my driveway, which came with a cover frame and an insect protection net. Beans are producing just fine underneath (with the benefit of some fertilizer). If you decide to cover your beans, make sure you do it on planting, not after the beetles have attacked, because it’s nearly impossible to find all of them and they’ll just keep snacking away underneath. Row covers are also a good way to keep the rabbits away.

Another vegetable I grow at home is eggplant. Eggplants are very vulnerable to flea beetles, which can kill a young seedling quickly and stunt the growth and production of older plants. Floating row cover is a good way to keep flea beetles off, but again you need to cover from the moment of transplanting, and they sometimes find their way in anyway, or emerge from the soil underneath. And you will have to remove the cover eventually when the plants get too large, or ready to produce fruit (eggplants are also self-pollinating, but some insect or wind assistance is helpful). Since the beetles lurk in soil, getting the plants away from ground level is what’s worked for me; I grow eggplants in pots on my deck.

As you can see, the leaves are undamaged and the Chinese Long eggplants are producing well. No cover needed, just a sunny spot several feet off the ground.

Another vegetable that’s done well for me this year is chard, especially a variety I’m growing for the first time called Bionda di Lyon. I got the seed from Baker Creek Heirloom Seeds, and have seen it in several other catalogs. It grew quickly and has produced huge lime-green leaves with white ribs; here it is overwhelming an 11×14 inch cutting board.

It’s been relatively pest-free, and the taste is nice and meaty, good for all sorts of recipes. It looks nice in the garden, too, though it doesn’t have the striking appearance of the rainbow chard blends.

But if you want a chard that’s better for your kitchen than your flowerbed, Bionda di Lyon is a great choice.

Speaking of chard in flowerbeds, here’s a photo I took recently at Ladew Topiary Gardens in Monkton, MD. 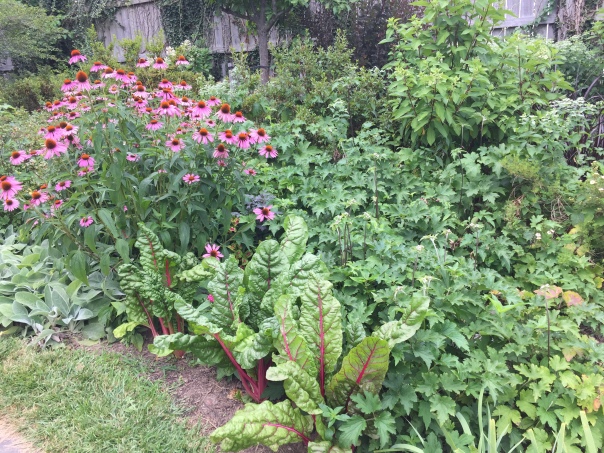 And that’s enough for one post. I’ll have a tomato and pepper report coming up later in the season.