Long-time readers may remember that last year, after about fifteen years of successful blueberry harvests (meaning that the birds got no more than about twenty percent of the berries), I harvested absolutely none. Those I consulted who are in the know said that catbird populations were way up, and certainly they are fond of blueberries.

With the thought that all those well-fed birds likely had lots of babies, and would be back, I decided to take on the challenge of protecting a row of blueberry bushes that are part of my front yard landscaping, surrounded by other plants. I drove some rebar into the ground at intervals of several feet, put pieces of PVC pipe on top of them, and capped those with some pipe caps we had sitting around from a previous fencing project. Then when the flowering was done and the berries forming, I covered the whole thing with a big piece of Micromesh. (Link is to Gardener’s Edge, which is one place you can find this product. I have also bought it from Territorial Seed, but they don’t currently seem to have the 16’x16′ size I needed. I don’t mean to promote any particular product or company over others, so if anyone knows other sources, or other similar products, please leave a link in the comments.)

Micromesh has advantages over bird netting and floating row cover. It doesn’t tangle like bird netting, and it is tougher than row cover, unlikely to tear with reasonable use. Also, plants under it don’t heat up as they can even under lightweight floating row cover. The only disadvantage is that it makes an awkward and kinda ugly intrusion in the landscape:

But who really cares as long as you get blueberries, right? I’ll be able to take it off when the fruit is done, and maybe next year I can make it look a bit better. Here’s a closeup: 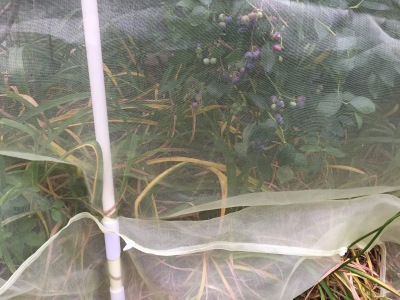 I’ve fastened the Micromesh to the pipes with the snap clamps you can buy for the purpose. And I have indeed been harvesting plenty of blueberries: 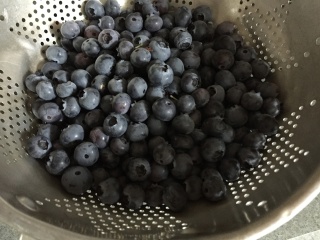 Two birds (both cardinals, a male and a female) found their way under the covering, and I had to let them out, but as far as I know those are all the incursions.

By the way, I also lost all my black raspberries last year (again for the first time), and meant to get the newly-organized planting netted this year, but didn’t get around to it. So I tied up a bunch of that shiny red-and-silver tape that is supposed to keep birds away because they think something’s on fire. Ha, no way. Birds are smarter than that. A friend says she is having good luck with one of those fake owls, so I may try that next. And come October I will look for some of the motion-activated Halloween decorations to bring out again in June. Mwa-ha-ha-ha-ha-ha.