Into the heart of the squash…

Posted on December 5, 2014 by Maryland Grows 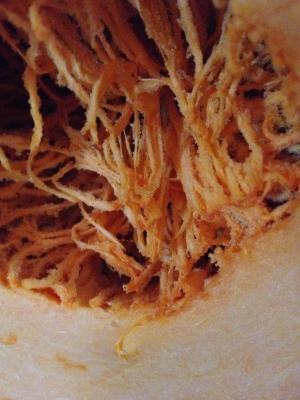 Every vegetable deserves a closeup, right?

To pull back a little… I cut into my last Piena di Napoli squash yesterday:

(Never thought of my countertop as squash-colored before. Huh.)

The occasion for making the cut (and the reason I’ll have to do more squash-cooking in the next day or so, before it spoils) was the annual holiday lunch for the Master Gardeners here in Montgomery County. I paged through cookbooks to find some new squash recipes, and ended up making two simultaneously, one for the lunch (which I hardly ate any of, so I’ll have to make it again) and one for dinner at home. This was easier than it sounds, because they were variations on the same recipe, out of Mark Bittman’s How to Cook Everything Vegetarian. I like the approach he takes to dishes like this one, laying out a basic recipe and then offering alternatives using additional or changed ingredients, although there is a lot of glancing back and forth between base and variation to make sure you haven’t put in the wrong things. And, in my case, keeping track of two pans and not mixing up the ingredient lists.

The basic recipe is called Panfried Pumpkin with Tomato Sauce (which works perfectly fine with other winter squash that are not pumpkins), and the variation we ate for dinner adds cocoa and pumpkin seeds. Here’s what it looks like on the plate: 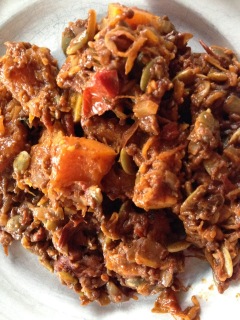 It has a nice warm taste and a varied mouth-feel (stew-like, with chewy and crunchy bits). If I made it again I’d probably up the cocoa a little so it made its presence known, and put in more hot pepper (I just used about half a dried fish pepper, crumbled with the seeds included).

(Notes on ingredients: 1) How much is 2 pounds pumpkin? If you have a regular butternut squash and it’s, say, one to three pounds, by all means just use it and adjust accordingly. If you have a giant mutant squash like I do, slice off one-inch slices and keep weighing them until you reach the right amount. 2) Bittman says “large chunks.” I wanted a bite-sized feel, so my squash chunks were about an inch square. Smaller would also work; just don’t go tiny. 3) This was a good use for summer-frozen oh-help-do-something-with-them stewed tomatoes, which were skin-on seeds-in and either cut into pieces, or cherries halved. Canned would be tidier. 4) You can pan-toast the seeds from your own squash if that’s how it works out. I used store-bought pepitas, because I haven’t yet reached the seed cavity of Mega-Squash and besides I needed to save time.)

Put the oil into a Dutch oven or other deep pan with a lid, over medium-high heat. Add one layer of the pumpkin chunks (you will probably have to do this in batches). Salt and pepper them. Brown the chunks (5 minutes or so), turn them, and keep cooking until all or several sides are browned. Remove the squash to a bowl, and add another batch. Repeat as necessary.

Take out all the squash and add the onion and garlic to the oil. Cook and stir until they are softened (5 minutes).

Pour in the wine or stock, scrape up any sticky bits, let the mixture simmer for a few minutes until slightly reduced, and then add the tomato (with juice). Bring the sauce to a boil and then reduce the heat and let it simmer for about 10 minutes, stirring occasionally.

Put the squash back in the pot, bring the mixture back to a boil, then cover the pan and turn the heat to low. Cook for about 10 minutes or until the pumpkin is soft but not falling apart. Add the pumpkin seeds, cocoa and cinnamon, stir, taste and season as necessary. Garnish with cilantro and serve.

Panfried Pumpkin with Cranberries and Pistachios

This is the lunch variation I made. It’s prepared basically the same way, but note the total absence of tomatoes.

Proceed as above, except where the tomatoes are added, add cranberries and orange juice instead. (Also, no cocoa, cinnamon, or cilantro.) Garnish with pistachios.

I’m impressed that this is not unduly sour, given that there’s no sugar in it. The orange juice sweetens the cranberries some (I’ve made cranberry sauce before with no sweeteners but orange juice and candied ginger, which does have sugar on it but hush) and so do the caramelized squash and onion, and I deglazed the pan with sherry, but still, three cups. It works! But you could add some honey if you wish.

← Giving Thanks
Seasonal color in radishes and turnips →

2 Comments on “Into the heart of the squash…”