You’ll probably hear from me several times on this topic, but to start with: I am digging my All Purple sweet potatoes. I grew a couple plants of this variety last year, which didn’t produce much, but I liked the taste so much I decided to try again with six plants, and these are coming in nicely. This was the first plant’s yield, plus some that were off the edges of the photo:

I’m doing what I know is an insufficient job of curing them, but it’s too chilly both inside and out to give them an 80-degree humid place to develop their sugars and toughen up for storage, and I completely refuse to put a space heater on in the bathroom for ten days straight. So the first batch got a few days outside in the sun and now is sitting on the hot water heater; the second batch, dug today, will sit in a sunny-ish window (maybe, as my husband suggested, with a foil-lined box around them). And I’m going to test the flavor at different stages to see how it changes. I’m not sure how much this type of sweet potato needs to develop sugars, or if the taste will alter much, but it’s worth experimenting with.

Purple sweet potatoes are naturally less sweet and more dense than orange or white ones, and the flavor is complex, earthy, almost wine-like. I’m very fond of it. They’re aesthetically interesting to cook with, too – really purple.

This means that you have to think a bit about what color your finished product will be. I learned from this blog (which has lots of other good information about growing these plants) that the purple in these roots will turn red when lemon juice is added and blue-green when baking soda is added, and the Stokes Purple Sweet Potatoes FAQs suggests avoiding baking soda in recipes because of the color change. (Stokes is one variety/brand of purple sweet potatoes, available in some stores.)

I’ve already tried this recipe for purple sweet potato latkes, which were a bit fragile but tasted great. And I have a long list of other recipes to try, and will pass on the best of them here. 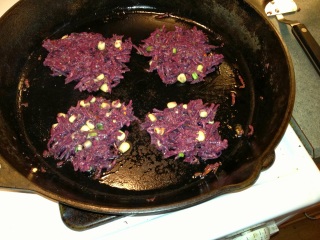 I grew the potatoes in my community garden plot, and have learned several things. First: I already knew this, but I need to work on the soil in that plot a lot. Digging this morning, after the long dry spell, was hard work. Also, the roots tend to be longer and thinner in spots where the soil is hard, and they form on long roots far away from the plant, or else directly underneath it.

I am glad to find, so far, no damage from voles, since I didn’t protect the plants at all. I did see one wireworm and found pinholes in a couple of roots. I also unearthed what I think was an Eastern worm snake: 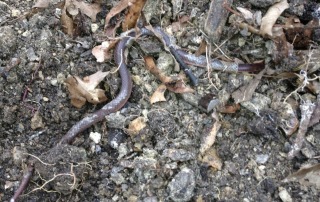 That was exciting! It looked, at first, like a very large earthworm (which is one of the things it feeds on) but then revealed itself as definitely serpentine. I removed it from the digging area, and it probably burrowed back down under the soil.

And my experiment of planting the sweet potatoes under a row of tomatoes has worked out fine: I’m pulling the tomato plants as I did the potatoes, the timing having worked out perfectly this year; the sweet potato plants were lush and grew out into the surrounding paths, without being unreasonably shaded out (and I got lots of delicious greens to eat); and so far there doesn’t seem to have been any significant root competition.