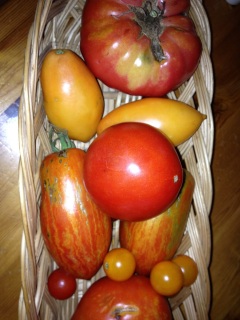 Here’s my 2013 Tomato Experience so far, with the caveat that I’m only growing one or two plants of each variety, and anything can happen to one or two plants, so it’s far from a proper trial.  I think I can summarize with: early blight like wow, but still not a bad harvest.

If I’d known about the perfect conditions for early blight ahead of time, I would have sprayed with copper fungicide (I usually don’t bother). But of course the point of weather is that you don’t know about it ahead of time.  It’s been a lovely summer otherwise.

New find of the year: Orange Icicle.  You can see a couple of these elongated orange fruits in the photo.  I’ve got one plant in the community garden and one at the demo garden; they’re both surviving and producing regularly; the fruits are thick-walled and sweet, and would probably make decent sauce if I had more plants, but they make such good fresh eating I don’t know if I’d bother, even for orange pasta sauce.

My other sweet orange tomato is the ever-delicious Sun Gold cherry, whose only fault is splitting.  I mean, with the rains we’ve been having, sometimes I go to pick and they are ALL split, which means a lot of stuffing orangey goodness into my mouth in the middle of the garden, but not much left for the salads.

The other cherry I’m growing doesn’t have a name; I call it Janet’s Cherry after the MG friend who gave me the seeds.  If you’ve been to a MoCo MG talk on seed saving, you may have a little packet of these seeds too.  They’re pretty standard red cherries with a good average taste, but the best thing about them is that unlike Sun Gold they hardly ever split, and yet aren’t unpleasantly thick-walled.  I’ll be saving seeds from these and passing them on.

Mortgage Lifter (top of the photo) has been a reliable heirloom for me this year.  Average production and great taste.  My other large-size tomato is Abruzzo (my husband brought seeds for this home from Italy last year); it’s been very slow to ripen and now the stink bugs are getting to the fruits.  I don’t have a lot of stink bugs in my community garden plot, but half of the ones I’ve seen seem to be on these tomatoes, even when they are just starting to blush (which is when I pick my tomatoes now).

I was given two plants of Iron Lady, a Cornell development supposed to be highly disease-resistant.  As you can see by the photo, it’s far from completely resistant to early blight, though both plants in their separate gardens held out longer than their neighbors.  It’s a determinate plant, so growth stopped at about the same time disease hit.  Fruit has been very slow to ripen, and tastes only average when it does.

Other disappointments include Big Mama (though this sauce tomato works well for everyone else, so probably I just had an unlucky plant) and Tropic VFN, which is also supposed to be disease resistant and isn’t, in either of my gardens, plus grew at half the rate of plants around it.  Supersauce is dying but produced lovely large elongated fruits for a while; Pompeii at the demo garden looks healthy and productive but I haven’t had a chance to taste it yet.

Speckled (aka Striped) Roman (striped fruits in the middle of the above photo) is still reliable and pretty, though I’ve seen more scars and catfacing on the fruits this year. Violet Jasper (at the demo garden) is also successful and lovely-looking.

And that’s all I can recall at the moment, but tomorrow we are having a tomato tasting at the demo garden workday, so I’ll take some photos and provide an update on what I liked.  Please share about the tomatoes that have done best (and worst) for you this year, in the comments!

3 Comments on “Some quick tomato notes”