A garden (almost) without stink bugs

Now, we have seen some brown marmorated stink bugs in the garden.  A couple of weeks ago we drowned quite a few adults that had joined their friends the harlequin bugs on the mustard plants.  And this week I saw plenty of nymphs on the chard, of all places, sucking away and leaving brown marks on the stems.  But on the whole we have far fewer stink bugs than last year at this time, and there are none to speak of on tomatoes, peppers, blackberries or asparagus, all of which attracted the bugs in previous years.

This was our harvest on Tuesday: 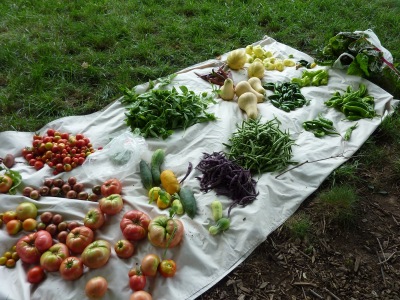 You can pretty much tell from this harvest that we still have problems with squash bugs and/or borers (the last summer squash plant is dying) and with cucumber beetles, though some cukes are hanging on.  Beans are still pumping out, peppers are coming in nicely, chard is still doing well; we had a couple of melons and some butternut squash; and look at all the tomatoes!  (We still pick them before full ripeness because we can’t count on getting there in between workdays, and because Manna Food won’t take fully ripe tomatoes for fear they’ll squish.  But we may not have to pick early because of stink bugs.)

I think all we can say at this point about the dread BMSBs is “we’ll see.”  But even if they arrive in the hundreds later, at least we’ll have had a garden without them. 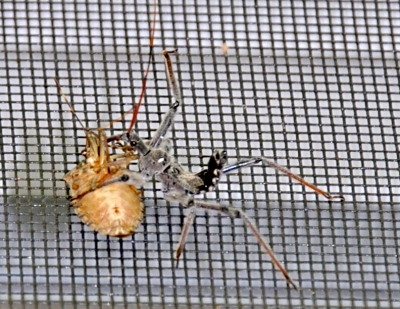 How’s the stink bug population in your garden?

6 Comments on “A garden (almost) without stink bugs”