Our vegetable teams at the Derwood Demo Garden have been working hard to produce healthy plants and lots of produce.  Here’s how we’re doing.

Bush beans have been producing like crazy.  ‘Provider’ was our earliest and heaviest bearer (ten gallons in two weeks from two five-foot rows) but is now done and pulled out.  It will be replanted for a second crop, along with ‘Blue Lake’.  ‘Fresh Pick’ was disappointing in yield and the favorite of the Mexican bean beetles.  ‘Masai’ is now coming into its own; I’m very fond of this dwarf bean that produces like crazy.

Pole beans are beginning to bear well now.  The scarlet runner beans are lovely on their teepee, and do seem to grow better with afternoon shade.  We’ve also got purple pole beans and ‘Blue Lake’ pole beans, both doing well and only moderately affected by beetles.  Planting fairly early and giving the seedlings some strong-smelling companions seemed to help.  Luckily our resident rabbit did not find the seedlings.

Squash
Things are not so good in the squash beds.  We’ve now lost nearly all our original plants, apparently to squash vine borers.  Neither covering the plants when young nor wrapping foil around the stems prevented the attacks.  We’re hoping that trying again will work – there’s still time to get in a zucchini crop, and hopefully the borers are all gone.  If we lived at the garden, we could use row cover on the plants most of the time, removing it only briefly for pollination, or hand-pollinate the squash.  That’s not an option, unfortunately.

One of our butternut plants is dead, but the other is climbing up the cattle panel arbor very well, with lots of fruits forming.

Cucumbers
Patti Oseroff tried several techniques to confuse cucumber beetles and prevent them feeding and spreading bacterial wilt:  straw mulch to prevent egg-laying at the base of the plants, reflective foil to warm plants and mystify pests, and planting of repellent companions.  The results are pretty good: many cucumber beetles are flying around the garden, but for the most part they’re feeding on other plants than cucumbers.  Some varieties are doing well (sorry! I don’t have the list with me, but I know Boothbay Blonde is producing nicely) although those in the companion plant bed are pretty overwhelmed by the companions (runner beans, rat-tail radishes, tansy, bee balm, nasturtiums, and probably others I’ve forgotten).

Melons
Planting in raised beds (some with plastic mulch) did help to warm the soil and give the plants to a good start, but it’s proved harder to keep them watered adequately (this is one of the few downsides to raised beds).  We’ve lost a few plants, but others are doing well and producing fruit.  More on that later, I’m sure! 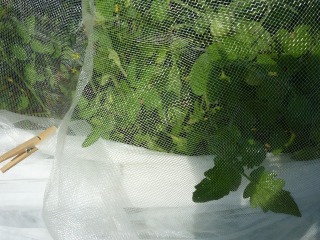 Last year’s tomato crop was hit badly by stink bugs, and using floating row cover over the plants proved awkward and caused the plants to overheat.  This year, Tomato Leader David Studley is using a product called Enviromesh over one group of tomato plants (with row cover on the lower half, as shown in the photo).  We are just now facing our first wave of stink bugs, so we are hoping it will work.  The mesh is easy to remove for harvesting (which is just beginning); the only disadvantage is the need to frequently readjust the net over the fast-growing plants (David does admit he should not have chosen the cherry tomatoes for this experiment).  Next year, perhaps we’ll try a tall cage.

We have donated almost 100 pounds so far to Manna Food.  This is our best donation year ever!