Yes, this is the catch-all soil post!  I have too much gardening to do for separate posts.

First, I wanted to point you to a brand new blog by Howard County MG Yung Cheng with a nice post on soils focusing on lead levels.  And that reminds me to do a soil test for the new part of my vegetable garden… thank you!

Next, after my disappointing experiences last year using a coir fiber-based mix for seed starting, I wanted to do more experimentation, comparing Miracle-Gro products sold at big-box stores.  First, I transplanted eggplant seedlings into peat pots, half using the peat-based potting mix, and half using a new product called Expand-N-Gro, a concentrate of coir fiber and fertilizer to which you add water. 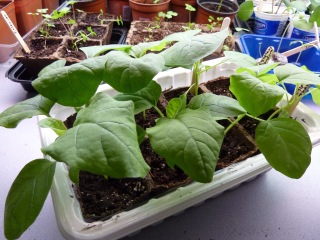 A week after transplanting, all the seedlings are doing equally well.  I would say the coir fiber product works fine as a potting soil.

The other experiment was growing tithonia (Mexican sunflower) from seed, using my egg carton method.  Half the seeds were put in Miracle-Gro seed starting mix (on the left) and half in the Expand-N-Gro (on the right).  You can see the difference.  The seed starting mix seedlings are all doing fine; the coir fiber side produced one viable though smaller seedling, one tiny shrunken one, one that’s pretty much dead, and three total duds.

So, based on these results, I would not try using Expand-N-Gro to start seeds.  The product is not marketed as a seed starting mix, so the experiment may be a little unfair, but since I had similar bad results last year using my own mix of coir fiber, rice hulls, and worm castings, I am personally off the stuff until reaching the transplantation stage at least.  I heard from one commenter last year who’d had a bad experience with the Jiffy Starts that use coir fiber rather than peat moss.  There are a lot of coir fiber mixes out there now, and I’d love to hear from anyone who’s had good or bad results with them.

Finally, if you’re interested in following my adventures as a novice vermicomposter, you can check out my Aunt Erica’s Worm Farm tag on my Rogue Eggplant blog.  I promise to have a new update soon on efforts to put down the Worm Rebel Alliance.