Grow It Eat It! does NOT include Groundhogs!

If I could misquote the late, great George Orwell, of ‘Animal Farm’ fame:

Exhibit A: This is what my fall broccoli looked like after the groundhog got through with it: 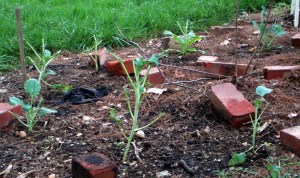 Oh, it’s too painful – this was a few weeks ago and I’ve just now gotten the courage to write about it. I know it was a groundhog, because on Saturday morning, when I was leaving to run an errand, he was just finishing up. I chased him under the woodpile (the local critters’ favorite hang-out spot). Nicolas and I set out to try to trap the fella, and I thought I’d patched up all the exit holes around the pile except for the one in which we placed the trap. Well…

When I returned from my errand, the trap had been tripped, but guess what – no groundhog. Drat!!!

I reset the trap, knowing it was probably pretty futile. BUT…later on in the week I found the fella munching away in our compost pile (after all, there was no more broccoli to eat). I chased him under the wood pile, and got a little smarter at plugging up holes. Again, I set the trap, pretty sure this time that there was only one way out. I’d even heard the little guy scratching around in there, trying to find an escape. The next morning, I tentatively went out to check the trap. Nope. No groundhog. Hmmmm…how did he get out? Surely he didn’t spend the night in there??? Hmmmmm…

As it turns out, Nicolas hadn’t had time to dispatch the groundhog (calling the local authorities, etc), and so I was going to take care of it all when I got home from work later that day. Guess what? When I got home, all excited, NO GROUNDHOG!!! That little bugger found his way out of the cage! He managed to get one of the clips unclipped and squeezed his not-so-little self out. Oh, woe is me!!!

Again, I was so mad, but what could I do? Now I’ll never get him/her. Serves me right, though, because I really should know better than to leave things unprotected. The good news, though, is that I left the broccoli there to see what might happen, and here’s what one looks like now: 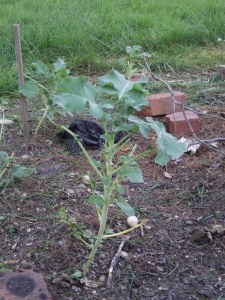 They’re determined to keep on growing (yay!). While the weather will probably get too cold and dark before this guy can grow a head, I’m going to see if I can overwinter it for a spring harvest. I guess that’s what gardening is all about, right? Surmounting challenges and making the best of the situation.

As for that pesky groundhog, I haven’t seen him since. Nor has he returned to re-eat the newly revived broccoli. I figure he’s probably getting ready to hunker down for the winter to prepare for making plenty of groundhog babies next year…

4 Comments on “Grow It Eat It! does NOT include Groundhogs!”