Drink your hibiscus and eat your dahlias

For Garden Bloggers’ Bloom Day I promised some flowers, so here we go.

This (as the sign says) is Hibiscus sabdariffa, or Roselle, a hibiscus with small but lovely flowers and edible leaves.  The flower buds are used to make drinks.  They’re usually dried (sometimes only the calyces are preserved) and then steeped; if you buy any herbal tea that has hibiscus in it, this is what you’re getting.

I picked the last flower buds this week (the plant was beginning to suffer from the cold nights).  Here they are posing with an Aji Limon pepper.

Steeping a handful of fresh buds in hot water for five minutes or so produced… pale pink water.  So I left them in the teapot longer… and then longer… and finally overnight.  Eventually I had something that looked like a real drink.

The flavor wasn’t strong, but it did have a mild sweetness and tartness.  I think I will try drying the remaining buds to see if something stronger and quicker to prepare might result.  More experimentation is called for, next year – I’ll definitely be growing this plant again, because for one thing, it’s pretty.

One of our biggest successes this year, flower-wise, was Unwin’s Dwarf dahlias – MG Madgie started these for us from seed this spring, and they were blooming as early as late June. 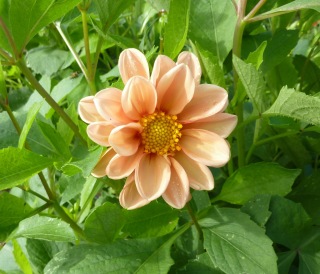 Here’s one of the resulting flowers – they also came in varying shades of red, pink and yellow, and varying amounts of doubleness.  They framed one of our tomato beds – still do, in fact, even though the tomatoes have been pulled up.  We’ll dig up the dahlias next week, perhaps (or the week after; I hate to disturb something that’s doing so well, and there’s no frost in the forecast yet).  I’m sure I can get volunteers to store the tubers inside over the winter, and then some of them can go back into the garden next year.

But a few of the tubers — we should eat!!  Yes, dahlia tubers are edible, as are the flower petals.  Can’t say I’ve tried them yet myself, but I will do so and report back.  They are supposed to taste rather like Jerusalem artichokes (and are related to them).  Here’s an article by William Woys Weaver on growing and eating dahlias.  It’s probably best to eat the tubers from the plants whose flowers you least liked, and save the other ones for planting.  I’m going to have a hard time choosing…

14 Comments on “Drink your hibiscus and eat your dahlias”