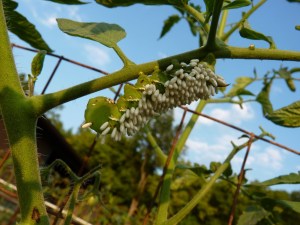 This is a horn worm that has been eating my tomatoes – a real bad guy! The white hats are eggs implanted by a parasitic wasp. The larvae from these eggs will kill this horn worm. GO! GO! GO! The Lone Ranger rides again! And there are a whole bunch of Lone Rangers!

Now, check out this guy! Is he a good guy or a bad guy?

Obviously he is a bad guy because he has spines on his back and he had been eating my raspberry plant with that mean looking mouth. Not so! He is a good guy – an assassin bug. Look what he is doing in this photo. 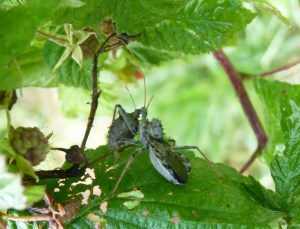 He is sucking the guts out of a stink bug that has been eating my raspberries. GO! GO! GO! I feel like I am watching the Roy Rogers rolling around in the dirt with a bad guy, knowing in advance who is going to win the fight. This one of the funnest parts of gardening, watching the good guys battle it out to save my garden from the bad guys and knowing who is going to win.