Balloons in the demo garden

Posted on September 1, 2011 by Maryland Grows

The challenge: MG Barbara Dunn needed to update portions of her map of the Derwood Demo Garden.  She often uses publicly available images such as satellite photos to aid in mapping, but wanted a closer view: aerial photos from perhaps 15-20 feet up.

What we all got to watch on Tuesday:  Barbara launching a camera with a timer, attached to a bunch of helium balloons.

Bracing strings tried to keep the balloons steady in the air, but even the small camera turned out to be too much weight, and the lift wasn’t great enough.

Solution: more balloons!  (This is always a good solution as far as I’m concerned.)

That gave the camera more launch, but still not enough to counteract the breeze. 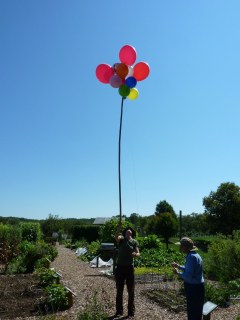 A steadying influence was needed, and we happened to have a lot of extra bamboo poles lying around.  However, the straight-up-in-the-air method produced a photo of the pole with Barbara looking at up it.  Whoops!

Another pole was taped on, and the camera was steady if not quite as high as originally desired.

Okay, so she was photographing the vegetable garden, but otherwise this is not a very Grow-It-Eat-It post (I feel rather hungry for birthday cake, however).  But in case you ever find yourself needing to take an aerial photo of your garden, this is one method.  (With the poles, the balloons may not be strictly necessary, but probably they save a little muscle work.  And they certainly look cheerful.)  Barbara is interested in trying another technique involving kites…

← Ooh, she really DID!
Tomato Patch: Do They Have More Fun in Spain? →