Well, this is depressing. 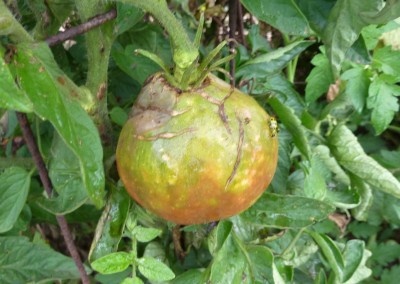 This is the full, ugly picture of stink bug damage:  a doomed tomato (in my despair I forgot to note which variety) in the Derwood Demo Garden.  (That’s a cucumber beetle hanging out on the side.  The stink bugs have moved on, I expect.)  And that’s one of the healthier plants there; we’ve had a lot of disease too.

But the news is not all bad. 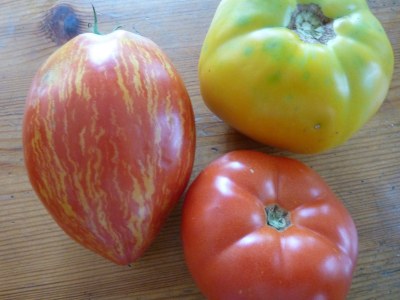 These are tomatoes from my own garden, where I’ve had the chance to pick early at breaker stage and ripen indoors.  I’ve had a great crop, especially from these three varieties.  From top: Jubilee, not quite fully ripe; Speckled Roman, one of the larger ones (they’ve had a small incidence of blossom end rot, but mostly are fine); and a small Early Big Red, since I sauced or gave away all the larger ones I had around before remembering to take the photo.  The last comes from seeds I got from Shumway’s in 2005; I believe the packet was free for ordering over a certain amount.  Since they were labeled “experimental variety” I didn’t think they’d be currently marketed under the same name, but Reimer’s seems to sell Early Big Red seeds and the description sounds reasonable.  Other companies may as well.  They’ve been very reliable.  But they are not as cool-looking as Speckled Roman. 🙂

I wish we made frequent enough visits to the demo garden to keep up with picking, and weren’t losing as many of the wonderful varieties there to the nasty villainous stink bugs.  Boo!  They are sucking on our jalapenos and other peppers big-time too, and I have no confidence in the popcorn crop.

3 Comments on “Tomato ups and downs”