The Grow It Eat It test garden at the Home and Garden Information Center is no different than your home garden. We have brown marmorated stink bugs too! 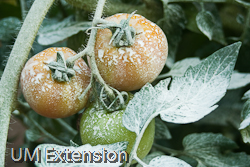 Here is what we are doing currently to battle the beast – spraying with Kaolin clay to provide a physical barrier to the bugs. Surround is the registered trademark for Kaolin clay that is sold as a wettable powder. Kaolin clay is allowed by the National Organic Standards Board (NOSB). Mix about 3/4 cup of the powder in 1 liter of water, shake, and spray the foliage and fruit to cover.

It will need to be reapplied after a strong rain. The white residue can be washed off the fruit with water before eating.

Here is the foliage and tomatoes without the application of Surround. It is in the row immediately next to the row with Surround.

Pepper plants are not immune from feeding damage either. Even habanero peppers are covered with stink bugs. Guess BMSB haven’t heard of the Scoville scale. 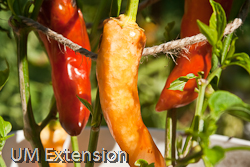 While this may not be the ultimate solution, it is reducing the population of stink bugs and their damage on the tomatoes for now.

Surround can also be sprayed on other vegetable crops to deter a variety of pests organically. Keep in mind to avoid spraying the flowers of insect pollinated plants such as squash.

We are also testing a stink bug trap that has a pheromone attractant. While it is certainly trapping a good number of stink bugs, it does not seem to be diminishing the number of pests or their damage on the plants. Is it attracting more stink bugs to the garden than would otherwise be there? 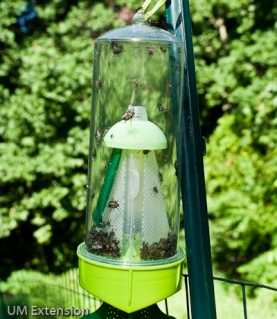 Hmmm…maybe, maybe not. The label says it will draw pests from a 30 foot radius, unlike the Japanese beetle trap that will draw from a much larger radius. The directions say that the trap should be touching foliage. However, the trap in our garden that is touching foliage has captured significantly less pests than the trap attached to the metal fence post.Note: We are not recommending this trap at this point, only testing. Next we’ll move the traps at least 30 feet away from the garden to see if it lures the stink bugs away from the tomatoes. Stay tuned…

← How to keep your basil growing
Inadvertently Dwarf Okra →