If life gives you cushaws… 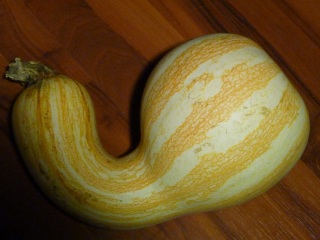 Here’s the last of the “pumpkins” my intrepid Halloween shoppers brought home from the farm stand.  It’s a cushaw squash, known either as Cucurbita argyrosperma or Cucurbita mixta depending on the source.

Cushaws have a long American history, having been used by Native Americans throughout the continents and then adopted by settlers from elsewhere.  Some varieties are strongly associated with regions such as the Southwest or the Ozarks.  The orange-striped one shown in the photo is one type; others are green-striped or solid green, orange or white.

You hear different tales about how palatable the cushaw is.  It’s traditionally grown for cattle feed, after all, or mainly for the seeds.  Some writers swear it’s the best for pies and others say you shouldn’t bother.  I came across a very simple recipe at a heirloom seed site and decided to try it.

Well, it was perfectly edible, and tasty enough for a side dish.  I added a little soy sauce and some dashes of cinnamon to the basic recipe; it could be jazzed up more with a touch of hot sauce or some minced hot peppers, or made sweet and spicy.  Cushaw has a distinct squashy flavor, but aside from that it’s a blank slate that you have to write on.  Here’s a recipe for cushaw custard with more information on common varieties.

I haven’t grown cushaw myself, but I gather it’s one of the easier squashes to grow if you have the room and a fairly long growing season (or a good warm microclimate).  Along with its cousins in the C. moschata species, C. argyrosperma/mixta is resistant to squash vine borers.  It grows big and stores very well, and thus makes an excellent staple food in the same vein as potatoes.  Personally I think I’d get bored if I had to eat it all winter.  If you don’t have a huge garden and lots of storage space, I’d recommend growing butternuts instead: similar ease of growth, borer resistance, much better taste, and shorter vines (though they still cover a lot of space).  But cushaws look really cool and are very historical, so if that brings you joy, go for it!

← "If you can grow him, he ain’t no problem to get rid of"
Happy Thanksgiving from Grow It Eat It →

2 Comments on “If life gives you cushaws…”