Yeah, there might be a better title for this dish.  But really, I started with a warty pumpkin:

My family went a little crazy buying Halloween pumpkins at a great farm market north of home, and this was one of them.  No, we didn’t try carving it, although some people do – it has very thick flesh, though, as you can see:

Big beautiful seeds, too, that I roasted.  But back to the warts.  This sort of pumpkin (it’s really a squash, as are all pumpkins, even the standard jack-o-lantern types) is also called peanut pumpkin, bumpkin pumpkin, and probably other names (I don’t know the specific variety name of this one).  Some squashes naturally develop these warts, and this sort is carefully bred to enhance that tendency.  In 2009, a seed company tried to patent all warty pumpkins (see articles here and here) but since warts have been decorating pumpkins for centuries the attempt failed.

So here’s my try at a soup (since I had to use the pumpkin for something, and the squirrels on the front porch had nearly finished the carved jack-o-lantern and started chewing on Wartyface, not very effectively).  I scooped out the insides and cut the fleshy part into large sections, then put them in the oven to bake at 375.  They were in there a bit too long – the idea is to make the flesh tender but not soft.  I put some butter on top of each piece: 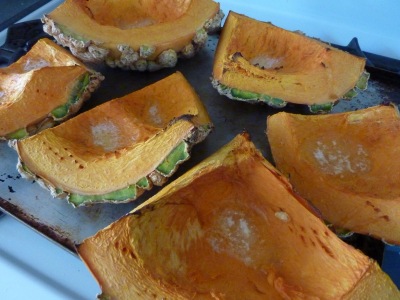 It might also be interesting to use a little honey, brown sugar, or cinnamon.  Anyway, then I separated the flesh from the skin and chopped it into 1-inch pieces.

Next: saute a sliced medium onion (or half a really big sweet one) in olive oil or butter until tender and browning, then add the pumpkin chunks and keep stirring occasionally.  I also added a bunch of fresh herbs I had on hand (dill, parsley, cress, chives – but whatever you have around that doesn’t clash is good) and salt, pepper, coriander and cumin.  And garlic, of course.  Add enough broth (and/or beer) to make it soup-like (the pumpkin itself will still release some liquid) and let it simmer for at least half an hour.  Pureeing is optional, but I did an adequate job with my Really Old Immersion Blender, and it turned out well.  And wow, yummy.  Those warty pumpkins have a great taste.

Maybe call it Herbed Pumpkin Soup, since you could make it with any type of pumpkin, or squash for that matter.  The other squash dish we had recently (also courtesy of the farm market) used a Long Island Cheese and was based on this Dorie Greenspan recipe-in-progress (I like that approach to recipes, since just about all of mine are in progress constantly).  My pumpkin was much bigger than hers, so I had to add extra filling, and used bulgur wheat with a little more liquid to cook it.  I also included onions, sauteed a little ahead of time.  It was a little goopy but good.

It would be interesting to try it without the cheese and with a more typical Thanksgiving-turkey kind of bread stuffing.  But I will have to get another pumpkin for that, because the only remaining one from the farm stand is a big Cushaw, which is shaped wrong for stuffing.  I’ll let you know later what I do with that one.