Those of you who’ve been reading my blog entries for a while know that my favorite vegetable plant (that I only discovered last year) is Melothria scabra, the mouse melon or Mexican sour gherkin. Why do I like mouse melons so much? Well, first of all, they are adorable. 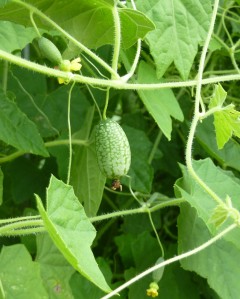 Usually when I’m asked to grasp at a description, I say that they taste like cucumbers (one-bite snack-perfect crunchy slightly-sour cukes) but look like tiny watermelons. They are in fact neither melons nor cucumbers: not in genus Cucumis or Citrullus nor from the same part of the world originally (cucumbers probably originated in Asia, melons and watermelons in Africa; mouse melons are from Central America), but they do belong to the family Cucurbitaceae (you can see a family resemblance in the dainty leaves and itty bitty yellow flowers).

No size context in the above picture except for me telling you itty bitty and tiny, so here’s a comparison shot. I was going to pair one with a grape but I don’t have any grapes right now. So Mouse Melon vs. Cherry Tomato, instead:

Aside from cuteness and snackability, I like them for their vigorous growth. The plants have few insect problems (in fact they seem to be a hangout for beneficials) and so far I haven’t lost any to the bacterial wilt and powdery mildew that kill cucumbers right and left in the same garden. They are a little hard to get started; germination (inside in April or outside in May) is pretty reliable, but those delicate stems and tendrils are subject to damage from cold or rough handling. My plan next year is to hold them in pots longer, until they are really ready for the big bad garden, but give each pot its own small trellis, because a tray of mouse melon seedlings is a tangled disaster in the making. They want to climb, but they want to intermingle even more. The plants growing on the cattle panel arbor in the demo garden had a period of wanting to bush out down at the base, but now they are climbing pretty well.

And just as I anticipated, we can now pick mouse melons overhead from under the arbor. We picked a lot this week, so I finally had enough to try pickling them. I made refrigerator pickles (not canned, must be kept in fridge, last a few weeks if you don’t eat them before that) and I’m not going to include a recipe since if you don’t already pickle you can search one out and if you do pickle you are better at it than me. But they turned out quite tasty.

The last reason I like mouse melons, that may appeal to some readers as well? If you grow them (look for the seeds under the name Mexican Sour Gherkin), you may well be the first on your block (or in your town) to do so. Although if I have anything to do with it, that won’t be the case for long. A million mouse melons for Maryland? Maybe.

17 Comments on “Melons for mice”