Flowers not doing their job 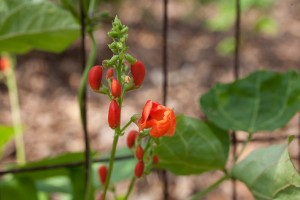 The photo of scarlet runner beans (by MG Katherine Lambert) is to appease those who might be visiting for Garden Bloggers’ Bloom Day expecting to see, you know, blooms. Please visit May Dreams Gardens for lots and lots of beautiful flower pictures and interesting text about them.

Those of us who garden for food as well as beauty know that flowers have a purpose: they make seeds, and in some cases a fruit or other edible casing for the seeds (we also eat the flowers on occasion). And though this mostly works just fine, there are times when due to circumstances beyond their control, flowers fall down on their job. Literally.

Raise your hands: how many of you here in Maryland (or other parts of the country hit by horrible heat waves) are having a good summer for beans? If you are, please leave me a comment telling me what variety you’re growing, because I need to know for future reference! I was expecting a bumper crop of beans from the demo garden (to donate to Manna Food and to eat ourselves). We planted Rattlesnake, Blue Coco, Grandma Nellie’s Yellow Mushroom, Borlotto, and both ordinary and dwarf runner beans. The result: about two handfuls of fresh eating beans. I did harvest enough Borlotto in the dry stage to use for next year’s seed, and until they were attacked by stink bugs they were handsome plants; here are the beans in “green” stage: 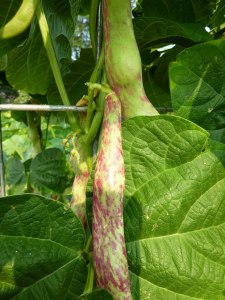 We also lost a scarlet runner to Mexican bean beetles, and the rest of the plants don’t look too great either. But the insects are not the cause of our pitiful harvest. And it’s not the humidity; it’s the heat.

Beans exposed to continual temperatures of over 95° tend to be unsuccessful at setting seed (meaning seed pod, meaning delicious bean). Flowers form, but simply drop. Runner beans have the same problem at even lower temperatures. Actually, our runner beans are still making flowers, though I have seen only a few beans form earlier in the summer; the other beans don’t seem to have any flowers at all. I am hoping that if we can keep the plants alive with all these stink bugs crawling on them, they will start making pods now that the temperatures are cooler. But it has been a disappointing summer, bean-wise, so far. (I bought beans at the farmers’ market yesterday, so clearly someone is managing to grow them. Bush beans are probably more successful in these conditions — but I like pole beans!)

Flower drop is also a problem in squash, tomatoes and peppers, but tends to happen when temperatures are too cool.

I try to be philosophical about this bean dearth. It’s an illustration of how a plant doesn’t grow just so we can enjoy the pretty flowers or the delicious fruit, but instead is an entity dedicated to its own goal of reproduction. The bean plants must “know” that seed set at high temperatures would not be successful, either because it wouldn’t form right, would rot, or would not germinate. So they just… take a break. Not a bad idea when it’s 95°. I hope today (at just over 70°) they are reconsidering their strategy. I expect to see flowers when I next visit, beans! You are on notice!

6 Comments on “Flowers not doing their job”