Grew it, ate it 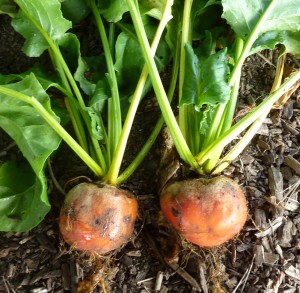 Here are a few recipes for the harvest.

First, from Gordon Clark of Montgomery Victory Gardens, a salad to celebrate his first successful attempt at growing muskmelons.

Golden Beet and Melon Salad: Just grate a few golden beets (as if you were making a slaw), throw in a couple of grated carrots, some mint, and then marinate for a couple of hours in a “dressing” of orange juice with a tablespoon of lemon or lime juice. Then, just before serving, chop some melon into bite-sized pieces and mix it in.

It should work with red beets, too, as long as you don’t mind an overall pink tendency to the dish. 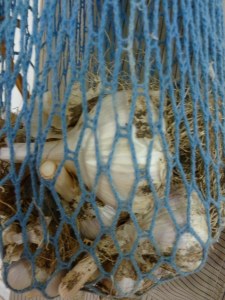 My son Nick, who is doing all the cooking while home from college this summer, came up with a side dish/garnish that helps use up our garlic harvest. He calls it “Onions and Garlic in Honey Sauce.”

Heat a medium saucepan and add oil. Add onions and garlic and cook stirring occasionally for 5-7 minutes. Add honey, continue cooking 5 minutes. Add wine and let simmer until wine and honey are syrupy. Add cinnamon or other spices as desired. 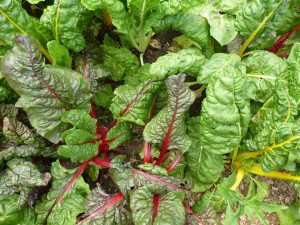 Nick has also been trying to find new ways to prepare Swiss chard, since I keep bringing it home. We’ve had a number of dishes including the delicious Swiss Chard with Olives and Lemon. He also tried combining steamed chard with sauteed onions and the mint syrup I’d already made from our excess of mint (I’ve been putting it in tea, both hot and iced, and it has many other uses). We decided it was interesting but would be better with some vinegar added.

What new ways to serve up your harvest (or someone else’s, if you have one of those neighbors who puts zucchini on your doorstep) have you found this summer?