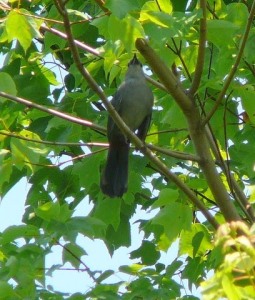 The morning concert here at Meadow Glenn is as good as that given by any high-school chorus. The school chorus, however, would have one advantage—number of participants. The concert in our yard is presented by one vocalist—a Gray Catbird.

The catbird sits about 15-feet up in a red maple tree that I’ve tended since it was a seedling. If I walk out at 6 in the morning to get the Post, the catbird usually is singing. If I weed our veggie garden later in the morning, the catbird usually sings on—sometimes for hours at a time. Its repertoire is the calls of other birds and sometimes local noises, though I haven’t yet heard it duplicate my ZZZzzzing.

A relative of the better-known mimic, the Northern Mockingbird, the Gray Catbird in my opinion is not quite so skilled. The mocker tends to repeat its repertoire time after time. The catbird seldom repeats. The mocker to my ears does a better job of mimicking other birds. Our catbird’s version of a Blue Jay’s call sounds like a jay screaming through a pipe.

From time to time a second catbird joins the first. Bird resources suggest the dominant singer is male, the second female. I’ve been watching the two over the last couple of months. At first they would fly in and out of our blue spruce scores of times each day. I think they successfully nested there.

In more recent weeks we see three—or four?—catbirds surveying the world from our roof and making themselves at home just about everywhere in our yard and gardens. On the hottest afternoons they retreat to the shade of our forsythia hedge.

The catbirds are more than fascinating music to my ears. When they’re not singing, they’re dashing about in our veggie garden searching for insects and other arthropods, part of a natural control system for ants, aphids, beetles, caterpillars, cicadas, and moths.

But catbirds eat more than crawling and hopping things. One of the young catbirds last Wednesday decided to explore our garage. When I stepped into the garage from the kitchen, the bird went into instant escape mode, P-A-N-I-C, which means up, up, and up—up to the ceiling, up over the rails, and up over the drive chains that open the doors—about a foot above the huge open door that spelled E-S-C-A-P-E.

I tried to help by pointing out the obvious, but the catbird wasn’t ready to accept human advice. After a few minutes I stopped giving directions and went about my business. An hour later when I next checked, the bird had found its way out.

But in the excitement of it all, the catbird apparently fell in love with Ellen’s new Subaru and decided to buy it. At least that’s what I think—because the catbird left a deposit on it—two in fact. And the deposits indicated the catbird had been eating Triple Crown blackberries from our berry patch.

I’m not an overly possessive blackberry grower. We have five plants that yield quart after quart. We’re willing to share a few berries—with friends, neighbors, and, we realize now, the catbirds too.

I’m thinking of posting a sign up in our garden: “Cat Birds, Please Make Yourself at Home and Eat All the Insects and Other Critters You Wish. But, Please, Eat Lightly in the Blackberry Patch. Thank You.”

← Scratching the gardening itch
Two thumbs up for tomatoes, one thumb down for fungus →