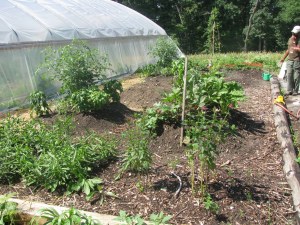 A lot of City gardeners wrestle with confined spaces or concrete backyards… making food growing seem hard (or impossible). Great Kids Farm, the Baltimore School System’s farm, hosts two demonstration gardens meant to show city dwellers that it is, indeed, possible to grow almost everything in a city yard. The schoolyard idea garden is built in soil piled high above rubble, in beds varying in size so visitors can really get a sense of what can grow in such a tiny space.

Nearby is the Earth Box demonstration garden. Earth Boxes are the brainchild of The Growing Connection (TGC), which is a grassroots project developed by the Food and Agriculture Organization of the United Nations (FAO). These boxes have a water reservoir in the bottom and a tube that rests above the soil line and allows gardeners to water plants from the roots up. This was originally developed for use in drought-stricken African countries, but they are great for city growers who want to conserve water. The Earth Box demonstration garden is bursting with fresh vegetables. 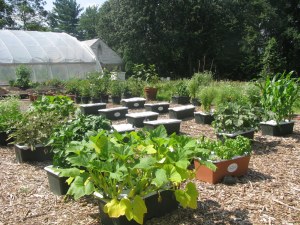 ← Gold in my garden
July harvest →