Corn from the “Trail of Tears” 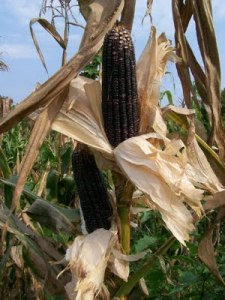 What has become known as the “Trail of Tears” is a particularly dishonorable episode in the long history of displacement of aboriginal people to make room for European settlers. In the case of the Cherokee, the saga began with the Indian Removal Act of 1830 which provided for resettlement of the “five civilized tribes” (Cherokee, Chickasaw, Choctaw, Muscogee-Creek, and Seminole) from their homelands in the Southern states to Indian Territory (Oklahoma) west of the Mississippi River. The Cherokee were removed in 1838 from North Carolina, Georgia, Tennessee and Alabama. The homes and farms of the Cherokee were burned and plundered as 15,000 men, women and children were rounded up by a military force made up of state militias, regular army, and volunteers under the command of General Winfield Scott. The Cherokee were imprisoned in concentration camps in Tennessee before beginning a 1000 mile march as winter approached. Most of the Cherokee had to walk, many without shoes or moccasins and little winter clothing except for used blankets from a hospital in Tennessee which had experienced a smallpox epidemic. Some 4,000 Cherokee died either in the camps or on the march from disease, starvation or exposure.

Legend has it that the Cherokee White Eagle Corn was a beloved staple food which survived the trail of tears to Oklahoma, rivaling another tale of starvation and saving valuable seed, the starvation deaths of plant breeders in Russia during the siege of Leningrad. 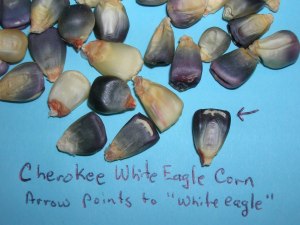 the name one might expect that Cherokee White Eagle Corn is a white corn. However it is actually a white and blue corn with a red cob and occasionally an all-blue ear. The name comes from the fact that some people claim to see an image of a white eagle on some of the kernals. Judge for yourself. Cherokee White Eagle corn is a good choice for a “Three Sisters Garden” because the plants grow 8-10’ tall and provide a good climbing structure for pole beans.

Cherokee White Eagle Corn is a dent corn which matures in 110 days. It is suitable for use as roasting ears, corn bread, and hominy. It is also suitable for feeding backyard chickens and other animals.

Another variety of corn carried on the trail of tears is a popcorn variety, Cherokee Long Ear Small. This variety is very ornamental with red, blue, orange, white and yellow kernels. Kernels are small and yield large “pops”, giving a low hull/corn ratio and great flavor. Plants are 6-8’ tall.

← Eggplant Protection
No Rain, No Pain →