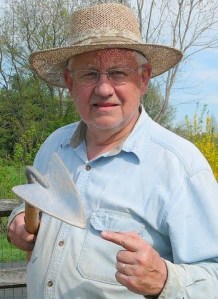 Wow, I could hardly wait. Each spring I hoped that I would be home when Jim Aborn arrived with his horse to plow our neighbor’s garden. I always wished I could have been over in Mr. Rau’s yard to hear him strike the deal for the work. But I was too little. I had to stay on our side of the fence.

What a monster horse with clanging chains and snorts—and sometimes, I almost imagined, fire flashing from its nostrils. But soon the horse and plow were in the garden and Mr. Aborn, reins draped over a shoulder, would “talk” his horse through the small garden area fenced on two sides. I soon learned that “gee” told the horse to turn right and “haw” to the left. Since the garden was only about 35’ x 20’ or so, Mr. Aborn had to struggle to turn the plow at the garden ends to avoid the fences and Mr. Rau’s well-tended lawn. My young ears soon picked up words other than “gee” and “haw,” words that I learned could lead to a soapy mouth, so I won’t risk mentioning any of them here.

But this morning the sun, moon, and stars all aligned, and the day finally arrived for me to do some spring veggie planting. But first I had to till my garden. Alas, Mr. Aborn and his horse have long been resting in peace. In fact, our veggie gardens, eight of them, are so small that a horse would have a difficult time standing in most of them, let alone plow and turn and plow and turn.

But I don’t need a horse to plow our veggie patches. Over the last 14 summers I’ve added compost and other soil improvements to our basic Howard County clay, so the soil is reasonably good. At least it’s good enough for me to serve as horse and my warren hoe as the plow.

A warren hoe is a hoe that features a fairly large, triangular head. See photo. But it is not a plow. A plow turns the soil in one direction, generally to the right. My warren hoe moves the soil left and right at the same time, making a central furrow of sorts.

So when I plow one of our plots with my warren hoe, I pull the hoe through the soil in one direction, say east to west, each pass fairly close to the previous one. When I’ve finished in that direction, then I do the same at right angles, say north to south. With reasonable effort for someone who’s celebrated the traditional “three score and ten years,” I can turn a small plot in 15 minutes, with minimal strain on back or muscles. Then I rake it level—and break up any large clods that catch my attention.

As I turn the soil, I think of how times have changed. I’ve, well, I’ve replaced a horse. As I turn over the soil, I sometimes smile as I think of “gee and haw” and the clanging of chains and the snorting of the horse.

No, this horse doesn’t snort fire. But on a warm spring day, I’m sweating like Mr. Aborn’s horse used to “lather up.” I’m sure glad I went to the Glenwood Community Center four times a week all winter to keep my muscles in shape and to walk each morning.

I’ve plowed. I’ve raked. It’s time to plant some seeds. Until next time….